New Zealand 26 Argentina 16:&nbsp;World champions New Zealand got the defence of their crown off to a winning start, but not until shaking off a terrible opening period in front of a Rugby World Cup record crowd at Wembley yesterday.">
X
Simon Lewis
     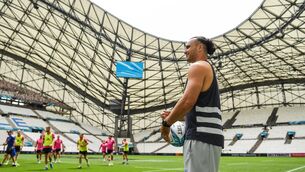 Water breaks could be on tap as temperatures rise in Marseille