Watch out Cheltenham:  Dublin's Racing Festival is haring up on the inside rail
 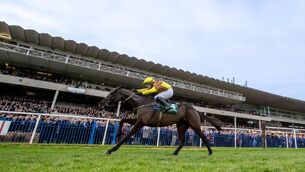