Letters to the Editor: Politicians need to deal with unsatisfactory situation in HSE

Irish Examiner view: The hard road back to freedom

The Mick Clifford Podcast - Fergus Finlay: We've been in this cost of living crisis before

Daniel McConnell: Could the new Dáil constituencies result in a Sinn Féin majority? 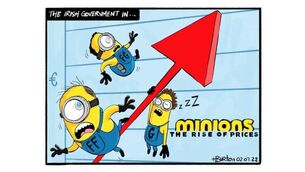 Harry Burton cartoon: Could the Minions do it better?