Generation of young people at risk of being 'lost to homelessness'

Homeless and deaf, Amy is longing for a 'forever home' 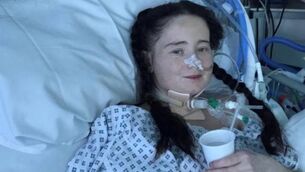