Taoiseach in Kyiv: ‘We admire you and we are with you – you are very much in our hearts’ 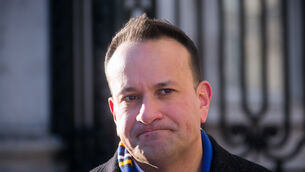