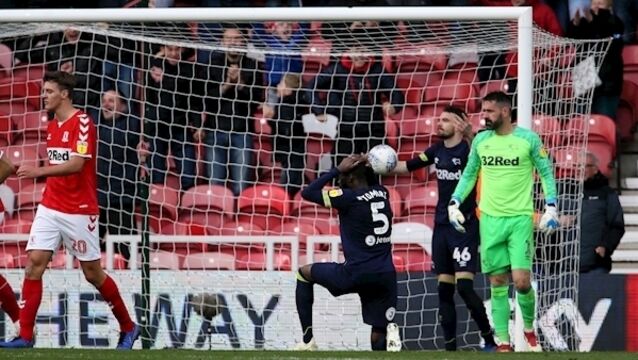 This comedy own goal cost Derby victory against Middlesbrough

A comedy own goal by Jayden Bogle denied Derby County a third successive win and a place at the top of the table as they drew with Middlesbrough in the lunchtime kick-off. 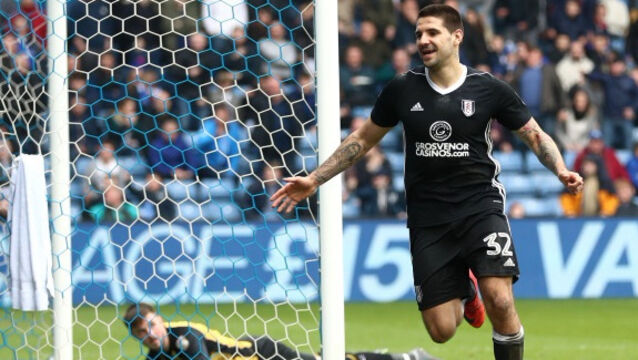 Aleksandar Mitrovic has continued his remarkable goal-scoring form for Fulham. 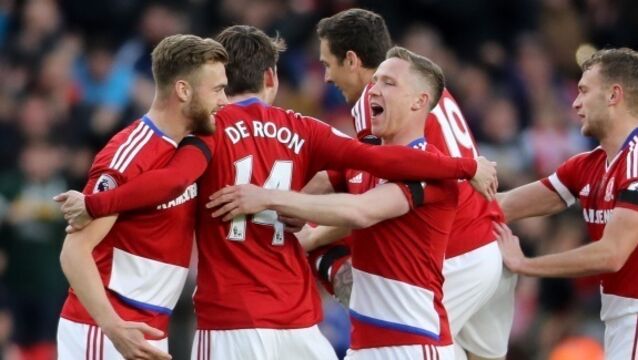 Hull get out of relegation, but things get worse for Boro

TERRACE TALK: Liverpool - In his head, Klopp must still be on winter break

Man City back on track, but Spurs and United can only manage draws

It was a bad day for the red half of Manchester.

Seamus Coleman scores in win to help Everton into second

Midfielder Gareth Barry marked his 600th Premier League appearance with a goal as Everton's unbeaten start continued with a 3-1 win over Middlesbrough which moved them into second place.

A renewed interest in Middlesbrough for Frank and Walters’ Paul Linehan

Middlesbrough back top after gritty win over Sheffield Wednesday

Boro back top after gritty win over Wednesday

Middlesbrough 0 Everton 2:&nbsp;Gerard Deulofeu turned in a master-class to send Everton into the Capital One Cup semi-finals and fulfil the prophecy of Middlesbrough boss Aitor Karanka.

In the words of Bill Hicks, let&rsquo;s plaster on a smile and plough through this shit one more time.&nbsp;

Mayo coach Barry Solan set to link up with Arsenal

Local reports in Mayo last night claimed the county footballers&rsquo; strength and conditioning coach Barry Solan is to work with Arsenal at the end of the championship.

Emotional finale on Tyneside for Newcastle

Newcastle United 2 West Ham United 0: As a survivor of testicular cancer, Jonas Gutierrez is used to winning battles far more important than those against mere relegation.

MAN CITY 2 WEST HAM 0:&nbsp;Sergio Aguero moved to the top of the Premier League goalscoring table, a sad reminder of what a poor job Manuel Pellegrini has performed in trying to keep Manchester City in first place in the real thing.

Chelsea maintain grip on top with win at West Ham

Chelsea followed up their Capital One Cup victory with a hard-fought 1-0 win on their return to Barclays Premier League business at West Ham.

Alan Pardew returned to Upton Park and saw his Crystal Palace side put West Ham to the sword to increase the pressure on Sam Allardyce.

Harry Kane again provided the heroics for Tottenham as he equalised with the final kick of the game to prevent West Ham collecting a third successive win at White Hart Lane.

Gunners battle to 2-1 win over Hammers

Arsenal battled to a 2-1 win at West Ham to close in on the top four of the Barclays Premier League.

West Ham manager Sam Allardyce has been left counting the cost of the international break as both striker Diafra Sakho and midfielder Stewart Downing are doubts for the Barclays Premier League trip to Everton.

Blues survive scare to win as Gunners ease past Burnley

Chelsea survived a scare to maintain their four-point lead at the top of the Barclays Premier League with a 2-1 victory over neighbours QPR.

“I have no doubt he will be chomping at the bit now and ready to go having missed three games.”

Wayne Rooney apologised to his Manchester United team-mates for his reckless lunge on Stewart Downing and has no plans to appeal the red card which he admits he fully deserved.

Gerrard holds up to derby scrutiny

Kevin Nolan accused linesman Andrew Garratt of taking a guess on the decision that prevented West Ham from taking a valuable point at Manchester United.

Wayne Rooney was sent off in the second half as Manchester United were forced to cling on for a priceless Barclays Premier League win over West Ham at Old Trafford.