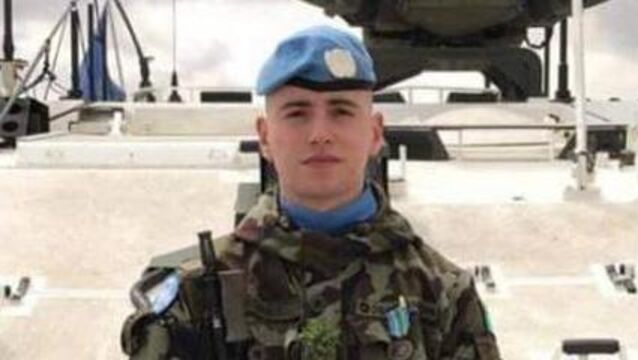 Memorial Mass hears of impact made by soldier Seán Rooney 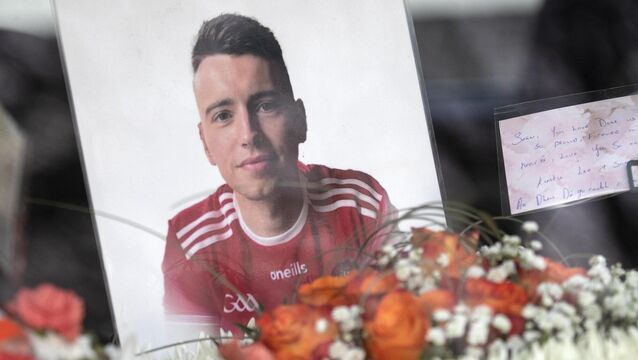 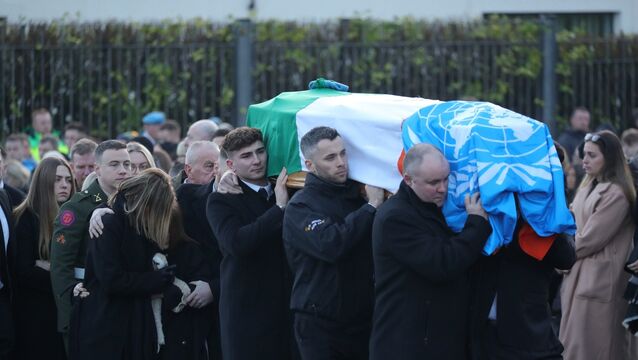 'I will love you forever, son': Mother of Pte Seán Rooney pays tribute to 'national hero'

The coffin carrying his body was carried into the church by his family and members of the Defence Forces, draped in the tricolour and a UN flag

Israeli leader welcomes US proposal for sea border with Lebanon

Ship with Ukrainian corn and vegetable oil docks in Lebanon

A ship carrying thousands of tonnes of corn and vegetable oil from war-ravaged Ukraine has docked in northern Lebanon. It is the first such vessel since Russia’s invasion of its neighbour started seven months ago.

Orphanage helped by Irish soldiers in Lebanon appeals for funds

Irish medics serving with the UN also do health checks on the children and provide an element of care for them.

Ireland would send peacekeepers to Ukraine if asked – Taoiseach

Ireland would be ready to enter into any peacekeeping operation in Ukraine if asked, the Taoiseach Micheál Martin has said.

‘Walking on the shoulders of giants’: Irish peacekeepers continue to serve with dignity in Lebanon

Some of the steps Lieutenant Colonel Denis Hanly and the soldiers he commands take as they serve in Lebanon fall on the same ground where Irish peacekeepers who died once tread.

Members of the Defence Forces serving with the United Nations Interim Force in Lebanon had to dodge warring militias, tank fire, and fanatical bombmakers. Neil Michael spoke to some of the families of the 47 who died in the region

Israel PM: Lebanon responsible for attacks, Hezbollah or not

Israel’s prime minister has said he holds the Lebanese government responsible for rocket fire launched from its territory, whether the Hezbollah militant group launched the weapons or not.

Shortly about to take up the presidency of the UN Security Council, Ireland has called for the countries to step back from this 'very dangerous' situation after today's shelling

The militant Hezbollah group has said it fired a barrage of rockets near Israeli positions close to the Lebanese border in retaliation for Israeli air strikes on southern Lebanon a day earlier.

Israel has escalated its response to rocket attacks this week by launching air strikes on Lebanon, military officials said.

Doctor and comedian among first in Lebanon to get vaccine

Lebanon has administered its first jabs of a Covid-19 vaccine. An intensive care unit physician and a well-known 93-year-old comedian became the first to receive Pfizer-BioNTech doses of the vaccine.

“The whole community has been shocked by this devastating event.”

A man has described the moment Tuesday’s explosion in Beirut hit his family home as “the most terrifying experience of my life”.

A British citizen living in Beirut said his family “feared he was dead” following Tuesday’s explosion. Andy Kemp, 58, spoke of the emotional moment his son discovered he was still alive after the blast “turned his office upside down”.

Beirut explosion: What is ammonium nitrate and why is it deadly?

Lebanon President Michel Aoun said that 2,750 tonnes of ammonium nitrate being stored unsafely in a warehouse caused the explosion.

Residents of Beirut awoke to a scene of utter devastation today after yesterday's massive explosion at the port sent shock waves across the Lebanese capital.

The explosion has killed at least 100 people and injured more than 4,000 others.

The UK Prime Minister has confirmed that British nationals are among those caught up in the aftermath of a huge blast in the Lebanese capital Beirut.

Outgoing Lebanese prime minister Saad Hariri has said he is withdrawing his candidacy for the premiership.

The President and Defence Minister have been evacuated from their hotel in Beirut.

Irish personnel have taken shelter after 'munitions' fell into the Irish Area of Operations in Lebanon earlier today.

We can all be proud of this small country’s contribution to international peacekeeping, under the umbrella of the United Nations.

A different perspective on life in a troubled country

In her art film about Lebanon, Maeve Brennan wanted to get away from the images we usually see on the news,

The Taoiseach has wished our defence forces serving overseas a very happy Christmas while visiting members of the Irish Battalion in Lebanon today.

Latest: Lebanese police have arrested a man in connection with the killing of a British embassy worker in Beirut.

A fire in a Syrian refugee settlement in eastern Lebanon has killed seven children, the UN refugee agency said.

Lebanon’s prime minister Saad Hariri has said he is putting his resignation on hold following a request from the president to reconsider.

Lebanese PM to visit France amid claims of Saudi pressure

Latest: Lebanese prime minister Saad Hariri has accepted an invitation to visit France after his surprise resignation while he was in Saudi Arabia, according to the French president's office.

Lebanon's Prime Minister Saad Hariri has said he will return to his country "very soon", in his first televised interview since he resigned in Saudi Arabia last week.

Lebanon's president said his country "can no longer cope" with the presence of Syrian refugees and appealed to the international community for help to organise their return.

The head of the UN has said he has confidence in the Irish general in charge of peacekeeping in Lebanon.

The head of the United Nations' peacekeeping force in Lebanon has said the country's military and intelligence are preventing the war in Syria from spreading over the border.

The leader of Lebanon's militant Hezbollah group says the world will benefit from having an "idiot" in the White House.

The Government has announced plans to resettle an extra 260 refugees from Lebanon who have been displaced by the Syrian conflict.

Two terror plots by the Islamic State group targeting residential and tourist sites in Lebanon have been foiled.

Over 100 Syrians detained by Lebanese army

Lebanon's army has said it has detained over 100 Syrians for illegal entry into the country, following a series of bombings the previous day that shook a village near the countries' border.

Five killed in attack by four suicide bombers in Lebanon

Five people were killed and 15 others were injured when a group of suicide bombers detonated their explosives in an eastern Lebanese village near the border with Syria.

A contractor said he negotiated with an Australian television network to snatch two Lebanese-Australian children from their father&rsquo;s family in Beirut but the network chose a cheaper option.

Lebanese militant group Hezbollah has struck an Israeli armoured patrol with a roadside bomb at its border.

The son of Libya’s late leader Muammar Gaddafi has been kidnapped by militants in Lebanon.

Irish soldiers welcomed home after tour of duty in Lebanon

189 Irish soldiers are settling back home after returning from a tour of duty in Lebanon.