Transatlantic travel returns: 10 awesome US destinations to visit in 2022

And just like that... you can stay in Carrie’s apartment (and closet) from Sex and the City 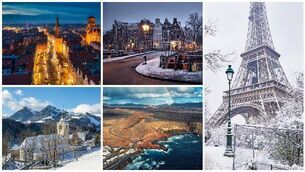 Cork airport is open again, here are five destinations you can fly to this month

Our travel, arts and food editors talk about where to go, what to see and what to eat this summer in this three part series. In Vol. 1, Tomas Breathnach and Melanie Mullan discuss this summer's must-see staycation destinations with Esther McCarthy.

Eoghan O'Sullivan is joined by Des O'Driscoll, Marjorie Brennan and Esther McCarthy to talk music, books, podcasts and streaming for your holiday season

Few things have the power to evoke a memory quite like food. Join Colm O'Gorman as he takes a trip down memory lane, behind his mother's apron strings and how the food of his childhood informed his life today.