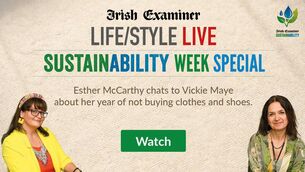 WATCH: How I got on after I gave up buying new clothes and shoes for a year