S Culture That Made Me: Donncha O’Callaghan on classic telly and My Therapist Ghosted Me 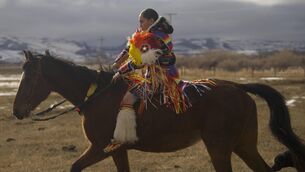