Dublin pull away to ease past Cork into last four

Cork hurley-makers under pressure due to supply issues with ash 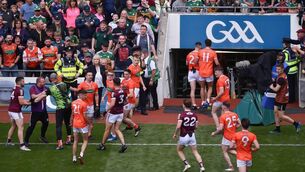