When the Cork- Dublin hurling/football double-header was first played in Croke Park in 2014, Cork edged the hurling match by one point. I met Jimmy Barry-Murphy upstairs afterwards and he was delighted.">
X
    

John Riordan: For Mia and Megan 'the beginning of the end of inequality' took a historic push

Tommy Martin: Jake Daniels shows us all what a real man looks like 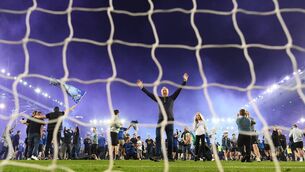 Larry Ryan: How will this Premier League season be remembered?