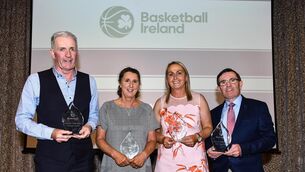 Kieran Shannon: The basketball international teacher who inspired my love of the game