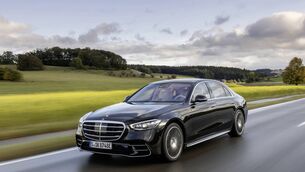 Mercedes S-Class PHEV review: Hybrid luxobarge is in a class of its own