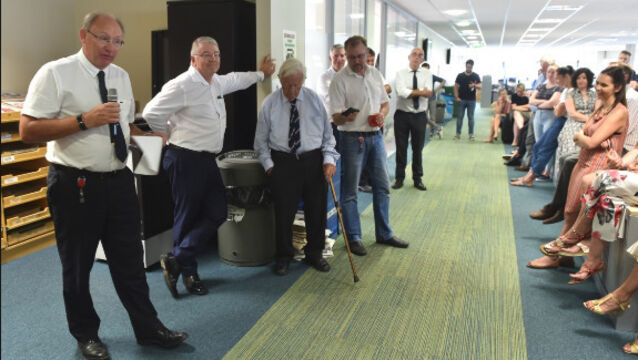 The Irish Times has completed the acquisition of all of the publishing and media interests of the Cork-based Landmark Media group, which owns the Irish Examiner newspaper and other titles. 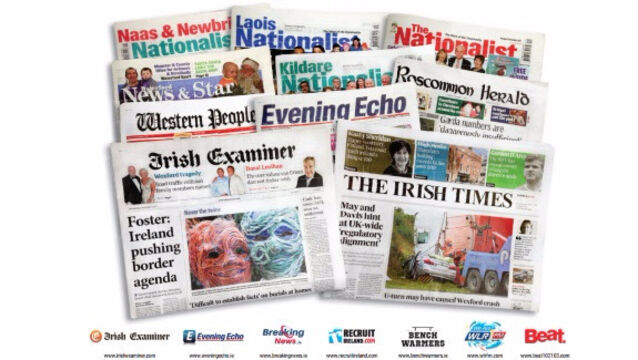 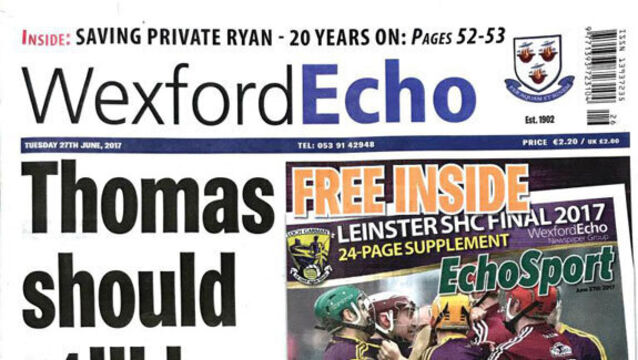 Liquidator hopes buyer can be found for Wexford titles

A provisional liquidator has been appointed by the High Court to the publisher of four weekly newspapers that circulate in Co Wexford, writes Ann O’Loughlin.

Liquidator hopes buyer can be found for Wexford titles

Printing company will have to put up security for costs

Webprint to make 26 of its staff redundant

Marks and Spencer and Electric restaurant and bar on the South Mall were the headline winners at the Cork Business Association’s annual awards and gala dinner, held on Saturday at the Maryborough Hotel and attended by nearly 200 guests.

The CEO of the Roscommon Herald has brought an High Court action against Thomas Crosbie Holdings for alleged wrongful dismissal.

‘Give part of broadcast funds to print media’

The chairman of Thomas Crosbie Holdings, which owns the Irish Examiner, has called on the Government to consider giving newspapers some of the proposed broadcasting charge which is due to replace the TV licence fee.

LONDON-BASED newspaper The Irish Post which was placed into voluntary liquidation in August, has been bought as a going concern by Cork-born businessman Elgin Loane, for an undisclosed sum.

Cork: Thomas Crosbie Holdings has announced that group chief executive Tom Murphy will assume responsibility for the Irish Examiner for now, following the resignation of Mairead Maher as chief executive of the newspaper.

A CHEMIST by training, a shovel engineer by vocation and a manager by desperation.”

Staff at the Irish Examiner and Evening Echo newspapers, as well as at new media company Thomas Crosbie Media (TCM), have been asked to take a 10% pay cut.

Tommy Barker looks at new luxury homes in a walk down memory lane.

A SPECIAL plaque has been unveiled to commemorate the 150-year historical connection between the Crosbie family &ndash; owners of the Irish Examiner &ndash; and Cork city centre.

A TOP hotel has been named Cork business of the year for its high level of service and for creating vibrancy in the city’s docklands area.

HIS devotion to his wife and family was remembered yesterday at the funeral Mass of the late George Crosbie, the former chairman of Thomas Crosbie Holdings, who died last Friday at the age of 83.

A DISPUTE between the Thomas Crosbie newspaper group and a Cork printing firm has been resolved, the Commercial Court in Dublin heard yesterday.

A printing company tried to change the way it imposed charges on the Thomas Crosbie newspaper group in breach of an agreement between the parties, the Commercial Court heard yesterday.

A PRINTING company tried to change the way it imposed charges on the Thomas Crosbie newspaper group in breach of an agreement between the parties, the Commercial Court heard yesterday.

One of Cork's business leaders has called on the Government to re-commit to infrastructural developments in the region to ensure Cork's continued success as "a key southern gateway".

More than half of all adults in Ireland are now using online services, according to a new survey, with internet usage overall up 6%.

Almost 50% of adults use internet

ALMOST half of all Irish adults, 1.69m people, identify themselves as internet users, according to JNIR (Joint National Internet Research).

IRISH EXAMINER owner Thomas Crosbie Holdings (TCH) has received formal approval from the Competition Authority for the proposed acquisition of a majority shareholding in radio stations WLR and Beat 102-103.

A DIRECTOR of Thomas Crosbie Holdings —which includes the Irish Examiner— is one of five key figures in the worlds of education, literature, business and philanthropy to be awarded honorary degrees at University College Cork next month.

IT’S a winter sport with a challenge, for spectators.

MORE than 200 business teachers meet in the Cork Institute of Technology on Saturday, for the Business Studies Teachers Association of Ireland (BSTAI) 20th annual conference.

MANAGING group director of Thomas Crosbie Holdings, Anthony Dinan will be speaking on managing change in the family business in Boole 4, University College Cork at 8.15pm on November 22.

JOHNSTON PRESS, the Scottish newspaper group, has splashed out more than €240 million to become the largest regional publisher in Ireland with the takeover of the Leinster Leader Group and Northern Ireland’s Local Press company.

Times may bid for Leinster Leader

THE Irish Times is considering making a bid for the Leinster Leader group of newspapers which is expected to sell for more than €80 million.

Keeping it in the family at UCC

OWNERS of family businesses from Ireland and abroad will converge on Cork tomorrow for a major UCC conference on issues affecting the sector.

FORMER British Prime Minister John Major will be the keynote speaker at a conference on sustaining Irish family businesses in Cork next month.

AWARD-WINNING journalist Cliff Taylor is to be the next editor of the Sunday Business Post.

Staff at the Sunday Business Post will meet the managing director of Thomas Crosbie Holdings (TCH), the paper’s parent company and owner of the Irish Examiner, on Monday.

THE new pensions ombudsman, Paul Kenny, has seen a massive increase in the number of queries to his office over the last seven months.

THE number of Irish adults accessing the internet has almost doubled to one million, according to a survey.

TCH break into British market with The Irish Post

Scores of thousands of workers have set their sights on securing a better job in the near future, according to numbers released today.

Thomas Crosbie Holdings, Ireland's fastest growing media company today announced that an internal candidate, Mr Tom Murphy, had been chosen as successor to Irish Examiner chief executive Padraig Mallon who is to leave the company at the end of November 2002.

Seventeen young journalists have today been awarded with the Thomas Crosbie Holdings Diploma in Journalism at a ceremony in Cork.