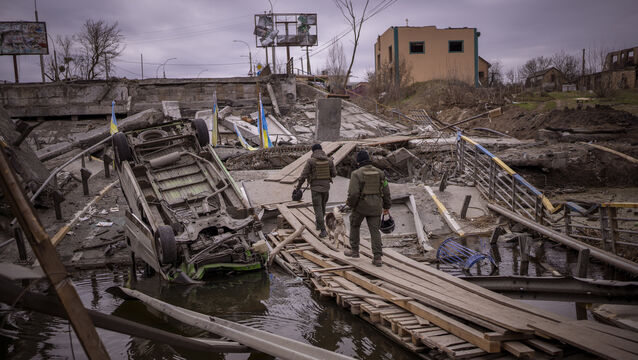 We forced the Russians back from Kyiv: Now we’re braced for what comes next

Ukrainians know the war is not over, so each day we clean up, document the destruction, and do our best to prepare, writes Nataliya Gumenyuk 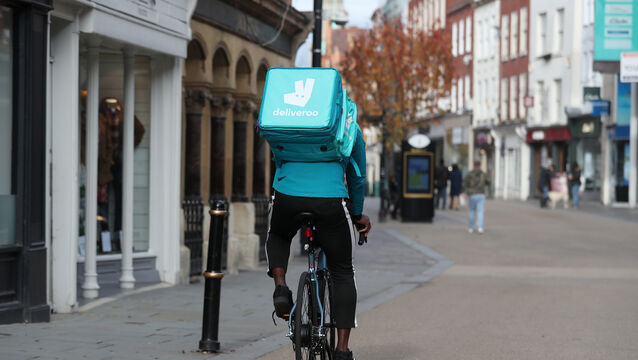 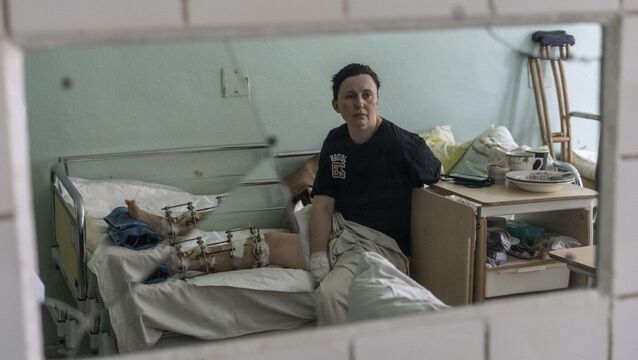 WHO: More than 100 attacks on healthcare staff and facilities in Ukraine since war started

Ireland to back further EU sanctions on Russia

Energy costs were rising before the war: Why wasn't the Government better prepared?

Letters to the editor: A triumph of truth over propaganda

Ukrainian refugee influx could be on a 'different scale'

The family arrived in Ireland from Kharkiv, Ukraine, after fleeing the Russian invasion to join husband and father Yura, who works as a watchmaker in Dublin

'We need to stop this crazy man, otherwise who will be next?'

'By the grace of God, the world narrowly averted catastrophe' after Russia shells nuclear plant

Letters to the Editor: Western folly must take some blame for Ukraine

Objective observers will recognise that the current Ukrainian crisis stems fundamentally from the US-sponsored and EU-backed coup against the legitimate government of that country in 2014.

In Ukraine, blasts were heard before dawn in the capital of Kyiv and in the major city of Kharkiv, Ukrainian authorities said, as diplomatic manoeuvring continued

The price of European gas has jumped 10% and global crude oil spiked, threatening to add to the inflation pressures facing businesses and households after Russia moved to recognise breakaway regions in eastern Ukraine.

Letters to the editor: State can’t let women down over maternity hospital

Ciaran O’Connor: Is West waking up to Russia’s disinformation campaigns?

In a White House televised address, the US President warned that a Russian invasion of the Ukraine “remains distinctly possible”

Cormac O'Keeffe: Irish Defence Forces will have to fight to realise this ambitious report

Ireland has some part in the arms industry, as evidenced by an event being hosted by the Department of Defence this month in the Aviva Stadium, writes Joe Murray, co-ordinator of Afri — Action From Ireland

Fergus Finlay: The women of Ireland will not ignore the plight of ordinary Afghans

Clodagh Finn: Why Holocaust Memorial Day is more important than ever

We must take note of what survivors have said: be alert to the dangers and be careful about words

The economic fallout during the coronavirus pandemic has made the prospect of World War Three “a risk”, the UK’s most senior military commander has said.

A nationwide search for men and women who served in World War II in a bid to have them remembered officially is being inundated by their descendants.

Headlong into the war zone in new documentary

Democracies under threat - Our options are beyond sobering

There aren’t too many images in modern history as sad, as forceful a reality check as the 1938 one of British prime minister Neville Chamberlain waving his peace-in-our-time note on an English airfield after talks with Hitler in Munich.

The Brigade on RTÉ tomorrow gives people a glimpse of what life was like for fighters in the War of Independence, writes Richard Fitzpatrick.

Children are dying from preventable diseases and women are giving birth in unsafe conditions in a Syrian camp, Médecins Sans Frontières have said.

Doris Salcedo rails against the violence of her native Colombia in her major exhibition at IMMA, writes Ellie O’Byrne

A welcome end to four years of Armageddon

At least 40,000 Irish died in the Great War before the guns fell silent on November 11, 1918. The relief at the arrival of peace was tinged with sorrow and a sense of unfinished business, writes Gerry White.

The US and Europe are no longer welcoming, so they should foster peace in war-zones to facilitate development and offset the need for people to leave, suggests John Lloyd.

Woman in a time of war: A documentary on IRA bomber Dolours Price

A documentary on IRA bomber Dolours Price is based around a revealing interview she gave before her death, writes Esther McCarthy.

Aid for Syria must wait for a political solution

The EU must not help Syria or lift sanctions until a credible political settlement has been reached. The question is whether such a settlement is even possible, writes Carl Bildt.

Physical and sexual violence was waged against women during the Civil War and the War of Independence &mdash; by Republicans as well as by the Black and Tans, according to a controversial paper to be presented next month.

One soldier's mental wounds from the harrowing reality of drone wars

Even soldiers who fight wars from a safe distance have found themselves traumatised. Could their injuries be moral ones? Eyal Press reports.

Instead of beginning a trade war, the EU should apply cool logic and agree to cut steel exports to the US while raising prices, writes Daniel Gros, director of the Centre for European Policy Studies.

The most powerful Syrian rebel faction on the fringes of Damascus has begun abandoning its stronghold in the once rebel-held enclave of eastern Ghouta.

How America’s darkest deed in Vietnam was eventually revealed

In Saturday’s ‘Irish Examiner’, historian Ryle Dwyer described his university education in Texas during the period of the Kennedy assassination and the escalation of American involvement in Vietnam. Today, as the 50th anniversary of the massacre at My Lai approaches, he shows how it took 20 months after the slaughter of hundreds of civilians by American soldiers for the story to become public knowledge, and that no one has really been held accountable

Working together to prevent nuclear conflict in Europe

Yemenis in the war-torn country's capital crowded into basements overnight as Saudi-led fighter jets pounded the positions of Houthi rebels.

As the Atlas Of The Irish Revolution hits bookshops, contributor&nbsp;Oliver O&rsquo;Hanlon&nbsp;looks at the coverage of the conflict by overseas artists and journalists.

The surviving spouses of War of Independence veterans received a 50% increase in their pensions from the State last year to commemorate the centenary of the Easter Rising.

Al Qaida's leader has urged his followers and all militants in Syria to unite ranks and prepare for protracted jihad.

At Cork World Book Fest, Anne Sebba will read from her account of the difficult line females had to tread in Paris in WWII, writes Colette Sheridan.

Last year was the worst yet for Syria’s rising generation, with at least 652 children killed in 2016, the United Nations’ child relief agency has said.

Operation Euphrates Wrath aims to surround and capture Raqqa, the de facto capital of the IS extremists’ self-declared caliphate.