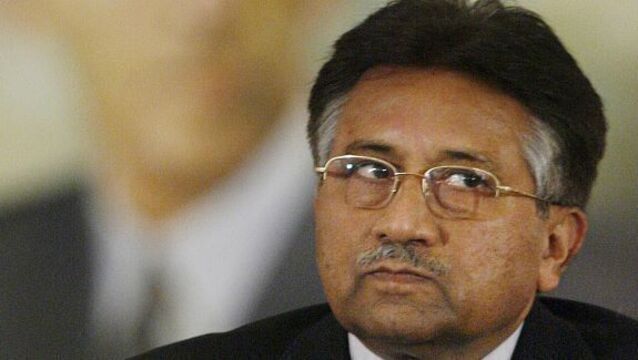 A government prosecutor says former Pakistani president Pervez Musharraf will be arrested in connection with the killing of ex-Prime Minister Benazir Bhutto if he returns home this month.

Pakistan governor shot dead by one of his bodyguards

THE governor of Pakistan’s wealthiest and most populous province was shot dead in the capital yesterday by one of his own guards, who later told interrogators that he was angry about the politician’s stance against the country’s blasphemy law, officials said.

Musharraf likely to remain in power

Opponents of Pakistan’s President Pervez Musharraf seemed unlikely tonight to have won enough parliamentary seats to remove him from power.

Pakistan’s president appealed for national unity after early unofficial returns showed the opposition heading towards victory today in parliamentary elections that could threaten his rule eight years after he seized power in a military coup.

Pakistan’s president today vowed that crucial parliamentary elections would go ahead tomorrow as planned despite a massive suicide car bombing at a campaign rally that killed up to 46 people – many of them supporters of slain opposition leader Benazir Bhutto.

Hundreds of mourners wept today as villagers buried victims of a horrific suicide bombing at a Pakistan election rally, an attack that killed 27 people and stoked fears about security ahead of next week’s crucial parliamentary election.

Tens of thousands of Benazir Bhutto supporters gathered in a southern Pakistan town today as her widowed husband prepared to address the first major campaign rally by her opposition party since her assassination in a suicide attack six weeks ago.

Pakistan’s US-allied president must resign before next month’s elections or the country could risk slipping into civil war, opposition leaders and an independent research group said today.

Trouble in all cities as supporters take to the streets

ANGRY supporters of slain opposition leader Benazir Bhutto took to the streets of Pakistani cities yesterday, from the Himalayas to the southern coast.

Two key Pakistani opposition leaders prepared to meet today to discuss whether to jointly boycott crucial parliamentary elections to protest at a state of emergency declared by President Pervez Musharraf.

Pakistani authorities mounted a massive security operation today to hold opposition leader Benazir Bhutto under house arrest for the second time in five days and prevent her from staging a protest march against emergency rule.

The party of former Pakistani Prime Minister Benazir Bhutto vowed today to hold a rally against emergency rule near the capital, despite threats from officials to crush it by force.

Pakistan's former prime minister Benazir Bhutto cancelled plans to travel abroad amid what she said were rumours that the government could impose a state of emergency during her absence.

Police in Pakistan are questioning three people over the bombing of Benazir Bhutto’s convoy, which killed at least 136 people and shattered what was intended to be a triumphant return from exile.

The midnight suicide attack that killed up to 136 people and shattered the homecoming of former prime minister Benazir Bhutto might have been the work of al-Qaida and the Taliban, authorities in Pakistan said today.

Pakistan’s military ruler is expected to sweep the vote in today’s presidential election, but could yet face disqualification by the country’s Supreme Court.

Musharraf to give up army post after re-election as president

President Gen Pervez Musharraf will step down as army chief and restore civilian rule to Pakistan, but only after he secures re-election as president, a government lawyer said today.

'Time running out' for Musharraf-Bhutto deal

Time is running out for President Gen. Pervez Musharraf to finalise a pact with ex-premier Benazir Bhutto that would keep the US-allied leader in office, Bhutto’s party warned today.

Pakistan talks in bid to freeze out Sharif

Pakistan’s president is engaged in last-ditch talks with Benazir Bhutto, another banished former leader, about a pact that could save his troubled re-election bid – and leave Nawaz Sharif out in the cold.

Bhutto and Musharraf in UAE for pact talks

Final round of Musharraf-Bhutto talks imminent

Pakistan President Gen Pervez Musharraf will make a final attempt to seal a deal with exiled former Premier Benazir Bhutto that could keep the general in power, a senior official said today.

Bhutto to return despite talks collapse

Former Pakistani leader Benazir Bhutto said today that power-sharing talks with President General Pervez Musharraf were at a standstill, but that she planned to return to the nation even without a deal.

Authorities in Pakistan were today investigating a suicide bombing that killed 16 people before a rally, the latest in a series of violent incidents since the army stormed a mosque held by Islamic extremists.

The husband of former Pakistani Prime Minister Benazir Bhutto was put under house arrest today after a court ordered his detention in a murder case.