Limerick’s unbeaten run in Division 4 of the Allianz Football League came to an end at Portglenone where the Saffrons turned in a superb second-half performance to run out 12-point winners. 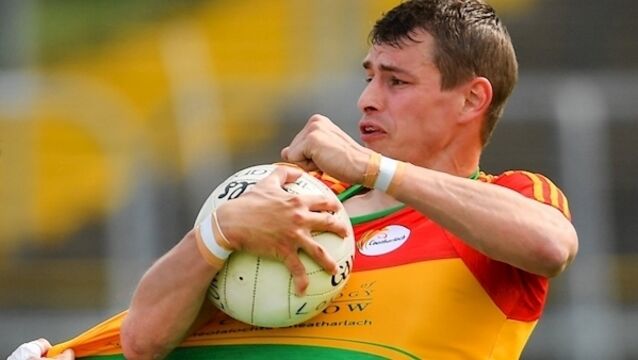 Antrim battle back after half-time to reel in Carlow

The Leinster side held a six-point cushion – 1-3 to no score – after 12 minutes, but the Saffrons reeled in the deficit after the break. Colum Eastwood (Foyle) was the first of the newly elected cohort of MPs to make his maiden speech in the Commons.

What a difference a year makes, eh Simon?

A fistful of Clint: 10 films that define Eastwood's career as a director and an actor

As the beloved 88-year-old actor/director releases another film, avowed fan John Daly selects 10 of his favourites

North’s chorus of despair: Veneer looks as if it may finally crack

When a fiction-based resolution of a crisis starts to unravel it is not always easy to pinpoint the moment progress reverts to tribal retrenchment.

Sinn Féin and the Democratic Unionists are hammering out details of a potential deal that could end Stormont's 13 month powersharing crisis.

Details of powersharing compromises allegedly conceded by the Democratic Unionists and Sinn Féin must be made public, the SDLP leader has said.

Latest: Howlin calls on Varadkar and May to intervene in NI talks

Latest: Labour Party Leader Brendan Howlin has called on the Taoiseach and British Prime Minister to both personally intervene to advance the stalled talks in Northern Ireland.

Northern Ireland's politicians have just hours left to reach a deal to restore powersharing at Stormont otherwise the UK Government will press ahead with legislation to approve a budget.

The Irish and British governments are set to present Northern Ireland's parties with their version of a proposed deal to break the powersharing impasse at Stormont, Sinn Féin has predicted.

SDLP leader: British direct rule must not and cannot be the Plan B

The leader of the SDLP has called for Sinn Féin and the Democratic Unionists to publish what progress has been made on powersharing talks.

Powersharing proposals should be published if no deal is done, says SDLP leader

The UK and Irish governments should publish their proposals to revive powersharing in Northern Ireland if no deal is done this week, the leader of the SDLP has said.

Sinn Féin has called on the SDLP to stand aside in two constituencies in the North to maximise the "anti-Brexit vote", but has not offered a reciprocal move.

A man has appeared in court accused of using a fake modelling agency to persuade women to commit sex acts.

Political chaos in Northern Ireland will not derail Brexit, Secretary of State James Brokenshire has said.

Arlene Foster faces down No Confidence vote in energy-scheme row

Stormont's First Minister has faced down a motion of no confidence during a day of drama at Stormont that included a mass walkout from the Assembly chamber.

Stormont's First Minister Arlene Foster will face a vote of no confidence in her leadership at the devolved Assembly later today as the fall out from a botched green energy scheme intensifies.

Survey shows 49% adults favour decriminalisation of drugs for personal use

Irish adults are split almost 50/50 on the question of decriminalising drugs for personal use, according to a national survey.

Colum Eastwood has become the first serving leader of the SDLP party ever to address the Ulster Unionist Party conference.

The SDLP has announced it will boycott any White House function under a Donald Trump presidency.

You put your head above this parapet, you&rsquo;re going to create a story that doesn&rsquo;t currently exist, writes&nbsp;Terry Prone.

Clint Eastwood: Donald Trump is on to something

Clint Eastwood has stopped short of endorsing Donald Trump, but in an interview in Esquire magazine he praised the Republican presidential candidate for being &ldquo;on to something&rdquo;.

OLDER boxing fans may recall Barry McGuigan&rsquo;s glory days and how he would always show gratitude to his manager Barney Eastwood by publicly declaring: &ldquo;Thank you very much, Mr Eastwood.&rdquo;

VIDEO: On set with the Fast 8 crew

The Fast and Furious franchise is set to keep on going forever, with sequels planned out to Fast 10 and likely more after that.

The SDLP could be poised to leave the North's Executive and take a place on the opposition benches.

Foyle Assembly member Colum Eastwood has been elected as the new leader of the Social Democratic and Labour Party (SDLP).

Barry McGuigan looks to push Carl Frampton to next level

Barry McGuigan sits still for just a moment in Belfast&rsquo;s Europa Hotel as he contemplates his answer.&nbsp;

Derek Richardson puts the buzz back into Wasps

An Irishman is the driving force behind the rebirth of one of English rugby&rsquo;s great clubs, says Julian Bennetts.

An American sniper with over 160 enemy kills wrestles with his life at war and the pressures of family life at home.

A couple have finally been allowed to buy their 300-year-old Donegal cottage house after living in it rent-free for 16 years.

Clint Eastwood has a new girlfriend.

Engineer was too scared to ask boss to make changes to Hillsborough stand, inquest hears

A structural engineer has denied he was among “a number of people” who were trying to distance themselves from knowing there were potential safety problems at Hillsborough before the 1989 disaster.

Aguero back as City rout Rovers

A life as dramatic as an opera for Wagner

NOT every life warrants a film of seven hours and 46 minutes, but not every life was as dramatic as Richard Wagner’s. The British film director, Tony Palmer, cast Richard Burton in the title role of the epic biopic, Wagner, which was shot over seven months and released in 1983. It will be screened, with two breaks, as part of this year’s Cork Film Festival.

Clint Eastwood’s second wife has filed for legal separation from the actor and director.

Eastwood splits from wife of 17 years

Clint Eastwood and his wife, Dina Ruiz, are going their separate ways.