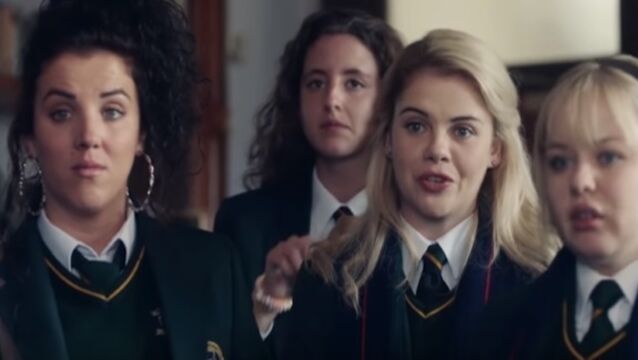 Channel 4’s Derry Girls wrapped up last night with poignant reference to Omagh bombings, a scene that has been praised by viewers and even moved fans to tears.

‘No paramilitary display’ at dissident’s funeral

Garda Commissioner Martin Callinan has insisted a paramilitary display will not be allowed at the funeral of dissident IRA figure Seamus McKenna.

Bail granted for son of man cleared of Omagh bombing

THE Lithuanian lawyer for an Irishman accused of trying to purchase weapons for the Real IRA has told a court Michael Campbell was a victim of a sting by Britain’s intelligence service.

THE dissident republican group the Real IRA has threatened to kill more police officers and declared its opposition to the Queen of England’s first visit to this country next month.

A Lithuanian court has begun hearing evidence in a trial against a suspected IRA dissident accused of trying to buy weapons and explosives there.

GARDAÍ investigating the brutal murder of a convicted Cork-based drug dealer are sceptical of claims a Real IRA hit squad was behind the shooting.

The trial of Colm Murphy who is accused of conspiracy in connection with the 1998 Omagh bombing is continuing at the Special Criminal Court in Dublin.

A Co Armagh farmer who gave evidence by video link from Belfast was described by a judge at the Special Criminal Court in Dublin today as "terrified'' when he repeatedly said he could not remember working for Colm Murphy, the man accused of conspiracy in relation to the 1998 Omagh bombing.

The home of the North's former Police Ombudsman Nuala O’Loan was targeted in a sectarian attack today.

Ministers to meet for economic talks

Tánaiste and Enterprise Minister Mary Coughlan will discuss the economy with Irish and British politicians in Co Donegal tomorrow.

A major security operation is moving into place to protect dozens of senior British and Irish politicians meeting at a lakeside hotel in Co Donegal next week.

The Supreme Court has ruled that the families and victims of the 1998 Omagh bombing are entitled to the transcripts and books of evidence used in the trials of five men at the Special Criminal Court as part of a civil case being brought against the five in the North.

Transcripts and books of evidence used in the trials of five men at the Special Criminal Court are "intensely relevant" to a civil action being brought against them in the North by victims of the 1998 Omagh bombing, the Supreme Court heard today.

The Supreme Court will hear an appeal later this week against the High Court ruling that the families of some victims of the 1998 Omagh bombing are entitled to certain, but not all, of the documentation they had been seeking from five persons to be used in proceedings for damages against the five in the Northern Ireland courts.

Judgment has been reserved in a High Court action brought by the families of some victims of the 1998 Omagh bombing aimed at securing documents from five persons to be used in proceedings for damages against the five in the Northern Ireland courts.

THREATS from the Real IRA that it is poised to launch a renewed campaign of violence across the North must be taken seriously, Fine Gael leader Enda Kenny last night warned.

Sinn Féin has criticised the police response to the collapse of the trial of south Armagh man Sean Hoey over the 1998 Omagh bombing.

No backsliding on devolution deadline,insists Blair

BRITISH Premier Tony Blair last night insisted there would be no backsliding on the North’s devolution deadline ahead of a crunch showdown with Ian Paisley.

FAMILIES of victims killed in the Omagh Bombing last night called on the Irish Government to launch a full cross-Border public inquiry into the atrocity.

A new form of DNA testing is under scrutiny during the Belfast trial of a man accused of the Omagh bombing.

Former IRA man turned British agent Kevin Fulton must be given special protection if he gives evidence at the Omagh bomb trial, a court heard today.

Unionists in the North will today scrutinise a report on paramilitary activity to see whether the IRA is honouring its pledge to wind down its operations.

The High Court is to give its judgment today in the case of a garda detective seeking to stop his trial on perjury charges relating to evidence he gave during the trial of Colm Murphy in relation to the 1998 Omagh bombing.

Fire drama to go ahead despite pleas

RTÉ plans to go ahead with its controversial drama on the 1981 Stardust fire despite emotional pleas by victims’ families to have it scrapped, it emerged tonight.

Police in the North are continuing to question a 34-year-old man arrested yesterday in connection with the 1998 Omagh bombing.

Real IRA leader Michael McKevitt launched an appeal today against his conviction for directing terrorism by attacking the credibility of a key witness and the non-disclosure of documents.

The trial of an electrician accused of the 29 Omagh bombing murders has been delayed, it emerged today.

GARDAÍ will join suspected paramilitaries as the only people in society to be denied the right not to incriminate themselves, rank and file members have warned.

Armagh man to be charged with carrying out Omagh bombing

The authorities in the North are preparing to charge a 35-year-old south Armagh man with 29 counts of murder in connection with the 1998 Omagh bombing, according to news agency reports.

The father of one the victims of the 1998 Omagh bombing has expressed his disappointment with the Court of Criminal Appeal's decision to quash the conviction of the only man jailed in connection with the attack.

The Court of Criminal Appeal has overturned the conviction of Colm Murphy for conspiracy to cause the 1998 Omagh bombing.

Non-jury court 'must be phased out'

THE Government has been urged to phase out the use of the Special Criminal Court after a backlog of cases to be heard is cleared by the middle of next year.

Police in the North have released a 44-year-old man arrested earlier this week in connection with the 1998 Omagh bombing.

President Mary McAleese today pledged to dedicate herself to building stronger communities in Ireland during her second term in office.

President up for fight despite rivals’ crises

PRESIDENT Mary McAleese was in a strong position to gain a second term in office last night after her nomination received widespread support.

Police were warned the IRA planned to bomb Newry on the same day they murdered a woman officer in the town, outside investigators have discovered.

The PSNI is reportedly on the verge of charging a suspected dissident republican with offences directly linked to the 1998 Omagh bombing.

Justice Minister Michael McDowell has told the Dáil that the Government is prepared to publish an edited version of the Nally Report into the 1998 Omagh bombing.

TDs are due to discuss the Nally Report into the 1998 Omagh bombing when the Dáil meets later today.

Omagh to feature in new film

Two Dublin production companies, Tiger Aspect and Hell's Kitchen, are about to start shooting a feature film based on the row between the-then RUC and the Northern Ireland Police Ombudsman in the aftermath of the 1998 Omagh bombing.

A woman who was injured in the 1998 Omagh bombing has called on the Northern electorate to vote for the SDLP in the Assembly election later this month.

Justice Minister Michael McDowell has held two-and-a-half hours of talks with the families of the victims of the 1998 Omagh bombing.

Police in the North have secured more time to question a husband and wife arrested earlier this week in connection with the 1998 Omagh bombing.

TWO hundred police and soldiers stormed a south Armagh village early yesterday and arrested a man and a woman for questioning about the 1998 Omagh bombing.