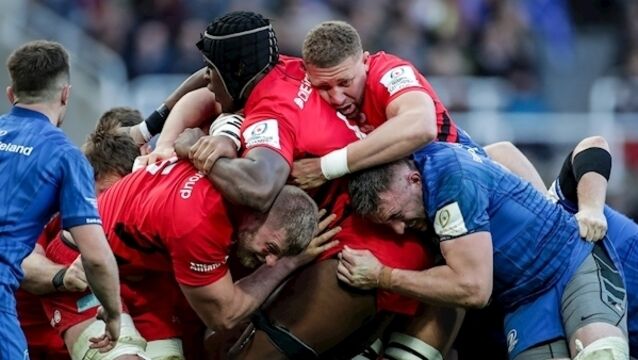 Should Saracens lose the points for their win over Racing, Munster would be deemed to finish second in Pool 4, however it would be Glasgow Warriors who would be next in line to take their quarter-final place as the next-best runners-up. 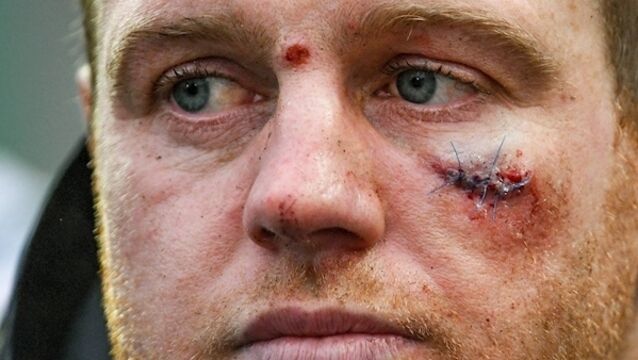 Donal Lenihan: Leinster beware: Saracens may be down but they’re far from out

On an explosive Saturday that saw Saracens relegated from the Gallagher Premiership on the eve of a must-win Champions Cup pool game against Racing 92, Munster took their exit from this season’s competition without firing a shot. 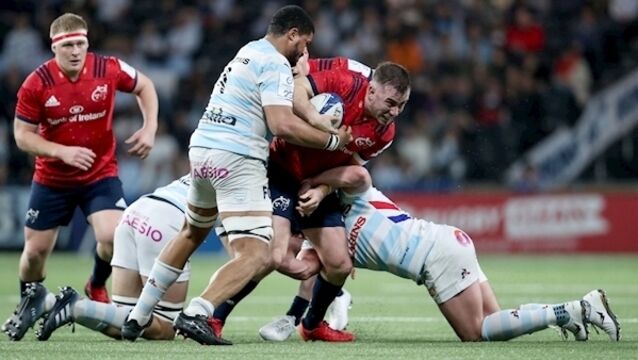 A win for already-qualified Leinster at Benetton on Saturday will see the four-time champions finish the pool stage as the No 1-ranked club.

Officials to probe '30-man brawl' in Munster's loss to Saracens

CHAMPIONS Cup organisers EPRC has launched an investigation into the sideline incidents in the second half of Munster's Round 4 clash with champions Saracens at Allianz Park.

Game in 60 seconds: Billy Vunipola steps up for Saracens

With Munster holding a slender 6-3 lead on 50 minutes, the mass brawl that led to a Munster penalty handed the visitors a chance to widen their advantage.

Jumping Jack has rediscovered his spring

Having missed most of last season through injury, it is starting to look like Jack O’Donoghue has the spring back in his step.

Hope more than expectation for Munster after Sarries reawaken interest

Munster have reached one objective in this Heineken Champions Cup campaign by beating Saracens for the first time in five years last Saturday.

Saracens might be a club who have suffered a few body blows recently but Munster fans arriving at Allianz Park tomorrow afternoon for the Champions Cup pool match will not find a squad who think they are on the canvas.

Saracens have named an almost totally different side to face Munster at Allianz Park tomorrow, while the Reds make one change from their 10-3 home win.

Munster won’t want for incentive in London this weekend. In Jean Kleyn’s permutations, beating Saracens at Allianz Park Saturday not only keeps Munster’s hopes alive of Heineken Champions Cup quarter-final qualification, but also offers the opportunity to extinguish the aspirations of the defending champions.

One man’s setback appears to be an opportunity for a couple of his team-mates as Johnny Sexton’s likely absence from the start of the Six Nations seems to have opened the door for a pair of Munster stars to take centre-stage with Ireland in the coming weeks.

Munster planning without Carbery and Kilcoyne for 'massive challenge' at Saracens

This weekend’s test will have to be negotiated without two fly-halves and a trio of front-rowers.

Saracens are set to bring their big guns back for the return match with Munster next weekend after leaving Limerick with a losing bonus point.

Three Munster supporters got chatting... an optimist, a pessimist and a realist

There’s an old saying that a pessimist complains about the wind, an optimist expects it to change but a realist will adjust the sails to suit the conditions.

Munster have defeated Saracens by 10 points to 3. Here's the match in 60 seconds.

Peter O’Mahony touches down as Munster see off Sarries

Love them or loathe them, Saracens have played a big part in Munster’s celebrated European journey.

Romain Poite will take charge of Saracens' visit to play Munster at Thomond Park on Saturday week as the referees for the back-to-back Champions Cup games were announced.

Here's the route Ireland's provinces must navigate to emerge from their Champions Cup pools.

The importance of Munster getting a good start to their Champions Cup campaign was underlined by the release of the pool fixtures this morning.

Hogg: ‘Saracens gave us the kick up the backside we needed’

As British parliamentarians are proving with almost daily inefficiency, leaving Europe can be complicated but as far as Stuart Hogg is concerned, the swift and summary elimination of Glasgow Warriors earlier this season has been the best thing that could have happened to his club.

‘Breaking ball, absolutely. The scraps are going to be huge’

There was a time early on in his career when it was almost mandatory to precede Robbie Henshaw’s name with the phrase ‘former Westmeath minor footballer’ given his three Leinster Championship appearances for the county.

If the playing personnel isn’t going to change at Munster, the game plan must

We’ve been down this road before, on seven different occasions now since Paul O’Connell, in tandem with Ronan O’Gara, lifted the Heineken Cup aloft in Cardiff 11 years ago after Munster beat the tournament’s greatest side to that point in a memorable 16-13 win over Toulouse.

Donal Lenihan runs the rule over the Heineken Cup semi-finalists

Saracens captain Brad Barritt has rejected claims his side will be intimidated by Munster’s travelling army of fans when the teams meet in Saturday’s Champions Cup semi-final in Coventry.

Relaxed Van Graan gets back to basics

Johann van Graan gave no indication about the quality of his Sunday night’s sleep but given the Munster boss watched a playback of Saracens’ seven-try demolition of Glasgow Warriors before bedtime, a fit of the night terrors would have been understandable.

Even Cheika and company gripped by World Cup fever

Sydney did not exactly grind to a standstill on Thursday night. Australia did not quite hold its collective breath.

Schmidt shuffles team to deal with injuries ahead of Australia clash

Joe Schmidt will start Ireland captain Peter O’Mahony at openside flanker for his 50th Test cap in Saturday’s series-decider against Australia after shuffling his options to deal with injuries.

Whatever about the short-term objectives of winning a Test series in Australia, Saturday&rsquo;s decider offers Ireland an excellent dry run for a potential World Cup quarter-final in Japan next year.

Australia 21 Ireland26: A long hot summer of regret and a determination not to revisit the pain of their 2016 tour to South Africa will help drive the bid to reach new heights in Sydney this Saturday after Ireland tied the series with this well-deserved victory at AAMI Park.

Ireland boss Joe Schmidt has thrown down the gauntlet to his Six Nations champions to emulate the heroes of 1979 by winning a Test series in Australia when they face the Wallabies for a third and decisive time on Saturday.

Joe Schmidt called it their "most difficult selection process" yet.

Saracens back row Schalk Burger has been cited for dangerous play at a ruck during Saturday’s Champions Cup victory over Northampton.

Champions Saracens hoping for results to go their way; Clermont through to quarter-finals

Saracens kept alive their hopes of qualifying for the Champions Cup knock-out phase after demolishing Northampton.

Clermont took out their frustration over the chaotic postponement of their Champions Cup clash at Allianz Park by inflicting a record 46-14 defeat on holders Saracens.

A war of words has erupted between Clermont and Champions Cup organisers over the handling of their aborted European clash with Saracens.

Rassie Erasmus: Saracens are the team everybody aspires to be like

Keith Earls summed it up neatly when asked this week about what sort of pedigree Saracens will bring to Saturday&rsquo;s Champions Cup semi-final.

A lot has changed since Munster last played Saracens but despite the distance between then and now, Tommy O&rsquo;Donnell believes there are still pertinent lessons for the province from that big defeat three years ago.

The 2009 Lions squad announcement unsettled Munster. The lesson must be learned

I have always believed that the announcement of the 2009 Lions squad to tour South Africa, eleven days before that epic Heineken Cup semi-final between Munster and Leinster in front of 82,000 people at Croke Park, played a key role in the southern province&rsquo;s demise that day, writes Donal Lenihan.

Saracens face Munster in the Champions Cup semi-finals after bringing Glasgow&rsquo;s European adventure to a halt with a 38-13 win at Allianz Park.

No April fools around at this stage of Champions Cup

Bernard Jackman and the talking points from this weekend&rsquo;s rugby.

Fifty years ago sons of Glasgow marched on Lisbon, as Celtic became the first British team to win football&rsquo;s European Cup. Now the city&rsquo;s rugby Warriors are striving for their own European conquest &mdash; at the home of seemingly invincible Saracens.

Toulouse to revisit scene of 2014 drubbing

Toulouse captain, Thierry Dusautoir, says they will be striving to erase the bad memory of their last visit to Thomond Park, in 2014. They are returning to Limerick to face Munster in the Champions Cup quarter-finals.

Munster and Leinster have discovered who they will face in their home quarter-finals as the Champions Cup group stage came to an end.