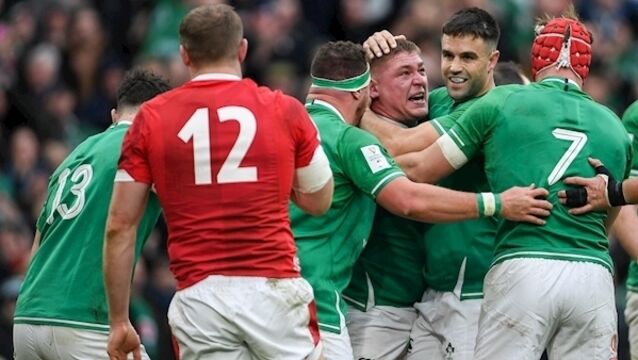 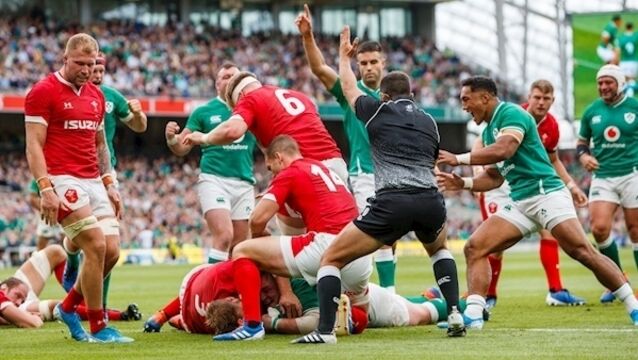 Having trailed 10-7 at half-time, Ireland started the second period with intent with two tries before the hour mark 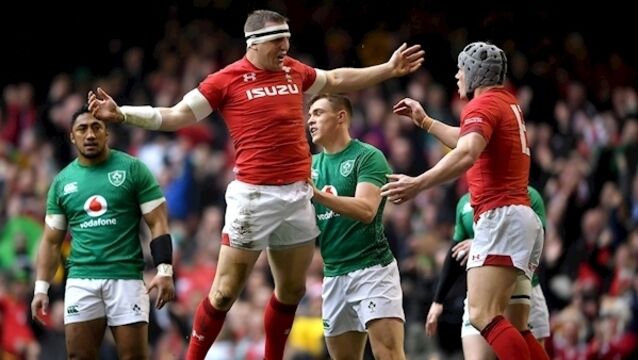 Wales have completed the Grand Slam after beating Ireland 25-7 in their Guinness Six Nations match in Cardiff.

Wallaby fly-half Christian Lealiifano played the most important role since his comeback from a bone marrow transplant after he contacted Leukaemia just over 12 months ago when he helped Ulster to a dramatic victory over defending champions Scarlets.

Connacht 8 Scarlets 30: A defence of their unforgettable PRO12 title win that began with two heavy home defeats, fizzled out with another drubbing at the Sportsground for Connacht.

Connacht v Scarlets: Connacht, having lost only once at home on their way to that memorable Guinness PRO12 crown a year ago, will be bidding to prevent a fifth league defeat at the Sportsground this season when facing a Scarlets side bidding for a semi-final place.

Leinster 45 - Scarlets 9: After a first-half arm wrestle, once Leinster found their route to the Scarlets try-line they returned time and again to exploit the gap &mdash; four tries in 12 minutes wrapped up this PRO12 clash. Ross Byrne&rsquo;s crossfield kicks to his wingers in space was the magic bullet for Leinster, and three of their tries in that stunning spell came via that route.

Leinster head coach Leo Cullen says Scott Fardy&rsquo;s experience will play a crucial role in the development of the academy players at the province. The 32-year-old versatile Brumbies lock will join Leinster after the Super Rugby season ends.

It all goes awry for Munster against Scarlets

Munster 21 Scarlets 30: For 40 minutes at Thomond Park last night, Munster played some of their finest rugby of the season and deservedly opened up a 15 point lead over Welsh visitors Scarlets in a truly remarkable Guinness Pro 12 encounter.

Ireland centre Luke Marshall is determined to right recent wrongs this evening when a struggling Ulster side travel to Llanelli to face the Guinness PRO12&rsquo;s in-form side unbeaten in eight games at Parc y Scarlets (7.35pm).

Connacht must turn it around quickly

Scarlets 17 Connacht 8: After a third successive loss, Connacht are in choppy waters, and Edinburgh&rsquo;s impending visit to the Sportsground has taken on a must-win feeling.

You would have got some odds at the start of the campaign that these two sides would go into the fourth weekend of the Pro12 not only not having won a match, but with neither of them having picked up a single point.

Ulster struggled to defeat a weakened Scarlets side at the Kingspan Stadium last night.

New Zealander Charles Piutau is anxious to get back into Ulster action for the visit of the winless Scarlets to the Kingspan Stadium this evening (7.05 pm),

At last, reasons for Munster to be cheerful

After a summer of pessimism where Munster&rsquo;s name has rarely been mentioned among the Guinness PRO12 favourites this was some way to start the season.

A disjointed Ulster slipped to fourth place in the Guinness Pro12 after they were deservedly overhauled by Welsh visitors Scarlets in Belfast yesterday.

Racing 92 sealed a home quarter-final tie in the European Champions Cup with a record victory over Scarlets in Paris.

Scarlets 21 Connacht 19:&nbsp;Scarlets returned to the top of the Pro12 table when controversial refereeing decisions once again played their part in Connacht&rsquo;s narrow defeat at Parc y Scarlets yesterday.

Connacht not panicking after Leinster defeat

Connacht are keeping faith with the same squad that lost to Leinster when they travel to Llanelli to face Guinness Pro 12 league leaders Scarlets tomorrow afternoon (2.30pm).

Leinster get a timely lift at RDS

Leinster have long become accustomed to laying bare the claims of pretenders at the RDS, but last night&rsquo;s defeat of the previously unbeaten Guinness Pro12 leaders felt like a significant victory for a side still finding its feet under new coach Leo Cullen.

Leinster head coach Leo Cullen has made five changes to his starting line-up as he aims to guide his new charges to a third consecutive Guinness Pro12 triumph against the Scarlets this evening (7.35pm kick-off).

Mixed bag from Munster in draw with Scarlets

Scarlets 25 Munster 25: How Anthony Foley judges this result at Scarlets depends on whether he believes the glass is half-full or half-empty.