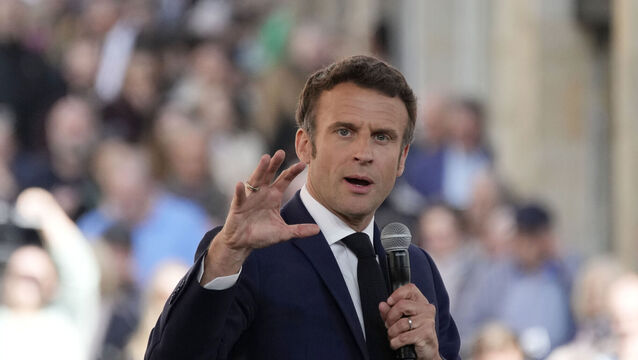 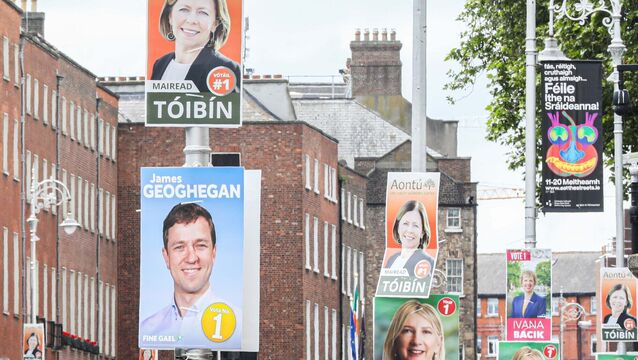 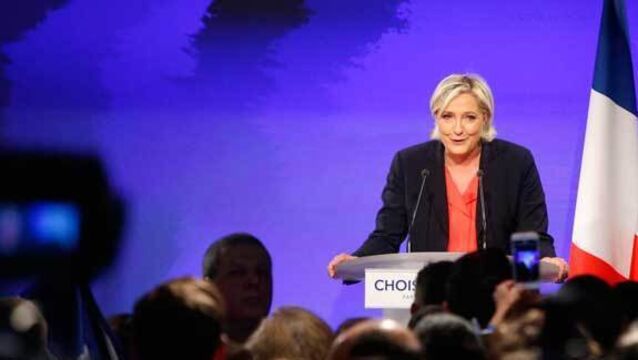 Latest: Paddy Cosgrave has rescinded the invitation to Marine Le Pen to be a guest at this year's Web Summit in Lisbon Portugal.

Varadkar to McDonald: You remind me of Marine Le Pen

The election of Donald Trump, Brexit, the rise of Marine Le Pen, and, maybe to a lesser degree, the fragmentation of the D&aacute;il, are all a consequence of so many workers believing that the system they had supported all of their working lives has betrayed them.

France will elect a president tomorrow and, if the opinion polls are correct, centrist Emmanuel Macron will defeat the National Front&rsquo;s Marine Le Pen. A poll released yesterday showed that the pro-EU Mr Macron has extended his lead.

Far-right presidential candidate Marine Le Pen has said she can pull off a surprise victory in France's high-stakes run-off election on Sunday.

The final day of campaigning in France's presidential election has featured protests and a candidate accusing the other's supporters of "violence" as the bad-tempered contest reaches its finale.

Marine Le Pen: I have no proof Macron has hidden Bahamas account

French presidential candidate Marine Le Pen says she has no proof her rival Emmanuel Macron holds a hidden bank account in the Bahamas.

This weekend France will elect a president. The campaign has been bitter and establishment parties have been cast aside.&nbsp;

The moral imperative is to support Emmanuel Macron

In the face of Russian cyber attacks and Moscow&rsquo;s backing for Le Pen, Guy Verhofstadt argues that Europe&rsquo;s only defence is for Macron supporters to come out and vote.&nbsp;

Marine Le Pen deliberately plagiarised parts of a speech from a former presidential candidate, as a "wink" to him and the voters she hopes to peel away in a run-off, her spokesmen have said.

Large crowds are expected on the streets of Dublin and Galway today to show their support for the European Union.

Le Pen has transformed the face of politics in France, writes Christine Ockrent

Marine Le Pen: People are revolting against the elite

Ms Le Pen and Emmanuel Macron, the independent centrist candidate who is her rival in the upcoming vote, sparred in successive television appearances.

Centrist Emmanuel Macron and far-right populist Marine Le Pen will battle it out for France's presidency, remaking the country's political landscape and setting up a showdown over its European Union membership.

French elections mirror a growing trend away from traditional politics

France is at the forefront of a global movement away from traditional politics and towards individuals free from party ties, writes John Lloyd.

Is another French revolution imminent?

If the the far-right Marine Le Pen and the independent centrist Emmanuel Macron square off in the second round of the presidential election, it will be a first in 60 years, says Zaki La&iuml;di. &nbsp; &nbsp; &nbsp; &nbsp;&nbsp;

With just three weeks before the first round of France's presidential election, far-right candidate Marine Le Pen is working to galvanise voters with the anti-Islam rhetoric that is one of her trademarks.

Le Pen: I would quit if France rejects Eurozone exit

Far-right French presidential candidate Marine Le Pen said that if her plan to pull France from the euro currency is rejected by the French if she is elected, she would resign.

Poll suggests that Marine Le Pen will be defeated

Even though opinion polling has taken a battering &mdash; Cameron, Brexit, Trump, etc &mdash; those who cling to the idea that the European Union, for all its myriad faults, still offers the best prospect for stability and prosperity will be cheered by the news that, for the first time, a poll predicts that Emmanuel Macron will beat Marine Le Pen in both rounds of France&rsquo;s presidential election.

French presidential candidates are promising new solutions for farmers who fear their livelihood, and the treasured cuisine and picturesque landscape it represents, is on its last legs.

France's far-right presidential candidate Marine Le Pen has refused to go into a meeting with Lebanon's grand mufti after his aides asked her to wear a headscarf.

The left-wing laggards in France&rsquo;s presidential campaign are talking about uniting, a move that may elbow out centrists from the second round and improve the anti-euro Marine Le Pen&rsquo;s chances of victory.

French far-right presidential candidate Marine Le Pen is facing more troubles, with fresh revelations in an investigation into her European Parliament assistants and criticism from the UN human rights commissioner.

Will France sound the death knell for social democracy?

As the French presidential election approaches, even workers in the country&rsquo;s rust belt are embracing right-wing populism. James Angelos reports

The university student charged with killing six Muslim men during evening prayers at a mosque in Canada was known for far-right, nationalist views and his support of the French rightist party led by Marine Le Pen.

The French presidential campaign has swung back into gear with most of the major candidates taking to the airwaves.

While the conservative candidate is likely to beat Marine Le Pen in a presidential run-off, the assumptions behind this can no longer be guaranteed, writes Hugo Drochon

Why Europe’s populist revolt is spreading

Josh Lowe, Owen Matthews and Matt McAllester examine what&rsquo;s happening in Europe to try to understand what&rsquo;s behind the emergence and spread of the current global populist revolt

French bonds under the spotlight following election of Donald Trump

French government bonds will be under close scrutiny this week amid concerns that the election of Donald Trump will help boost the chances of a victory of the far-right Marine Le Pen at the French elections next year.&nbsp;

Marine Le Pen takes down image of US reporter’s execution

French far-right leader Marine Le Pen has taken down a tweet showing the execution of US reporter James Foley after his family protested &mdash; but left up two other gruesome images of violence by Islamic State (IS) extremists.

French far-right party leader Marine Le Pen yesterday published on her Twitter accounts pictures of what she said were victims of Islamic State, prompting heavy criticism from the government.

With no clear-cut victor emerging from France&rsquo;s regional elections, parties from across the political spectrum now begin unofficial campaigning and jockeying for supremacy before the 2017 presidential race.

The anti-immigration National Front party has been routed in French regional election run-offs, despite dominating the first-round vote, according to projections from three polling agencies.

Marine Le Pen’s far-right National Front has collapsed in French elections, failing to take a single region after dominating the first round of voting, pollsters projected.

French far-right leader Marine Le Pen is attributing her party&rsquo;s historic gains in first-round regional elections to a people&rsquo;s revolt against the political elite, as France&rsquo;s mainstream parties seek to undo the National Front victories in six of the nation&rsquo;s 13 regions before the final round.

French go to the polls in wake of terror attacks

French voters are casting ballots for regional leaders in an unusually tense security climate, expected to favour conservative and far right candidates and strike a new blow against the governing Socialists.

France&rsquo;s far-right National Front party leader Marine Le Pen said the government was using the judiciary to persecute her as she went on trial for comparing Muslim street prayers to the Nazi occupation.

Le Pen on trial after comments about Muslim prayers