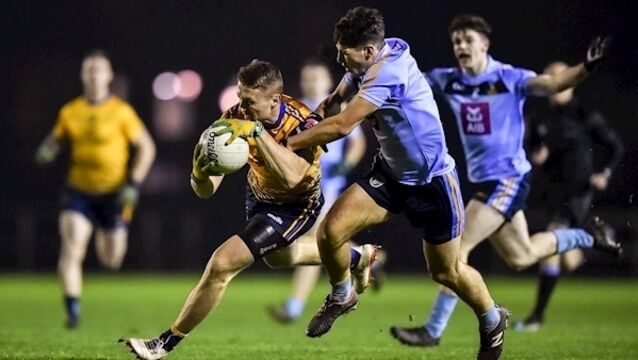 DCU dominated for the large part as they cruised past rivals UCD by fifteen points in their disappointingly one-sided Sigerson Cup semi-final in St Claire’s on Wednesday evening. 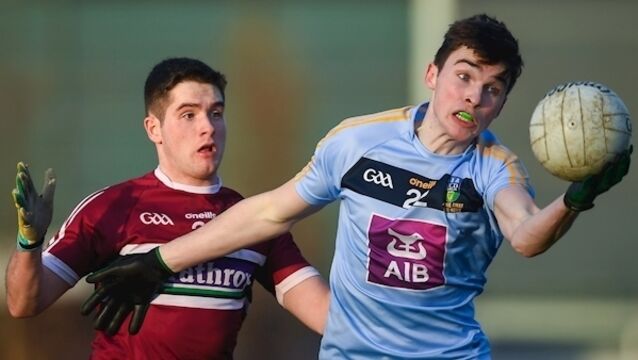 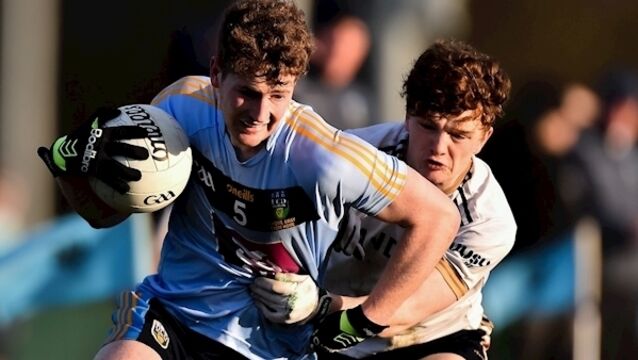 UCD overcame the loss of key marksman Con O’Callaghan as they edged UUJ by two points after extra-time in their Sigerson Cup first-round clash at Billings Park, Belfield.

Kieran McGeeney had to settle for a draw on his first return to Kildare as an opposing manager after Jimmy Hyland earned the home team a share of the spoils with the last kick of the game.

Ballygunner back with a bang

Red and black were the colours on the trophy yesterday as Ballygunner made it a first Munster club senior hurling title since 2001, an emotional victory for the Waterford men. They had lost to yesterday’s opponents, Na Piarsaigh of Limerick, twice at this stage in the previous three years, and their determination to break that series of defeats was clear in Semple Stadium.

MEP Brian Crowley has been urged to resign after four years of absence from the European parliament because of the &ldquo;damage&rdquo; to Ireland&rsquo;s interests and because of the UK&rsquo;s imminent exit from the EU.

Mike Brown will feed off Owen Farrell&rsquo;s aggression at Ellis Park after insisting that his captain&rsquo;s deeds rather than words will inspire England against South Africa.

There have been renewed calls for Ireland South MEP Brian Crowley to resign or clarify his position after not voting once in the European Parliament since his re-election four years ago.

Lewis Hamilton will start from pole position in Sunday's Spanish Grand Prix after edging out Mercedes team-mate Valtteri Bottas by just four hundredths of a second.

It appears that Hartley has taken exception to coverage of the news.

Many believe there’s loads more to come from Ireland. I wouldn’t be too sure

After the 2015 World Cup, the Racing 92 coaching ticket was invited to meet the ex-England head coach Stuart Lancaster in Paris, writes Ronan O&rsquo;Gara.

England captain Dylan Hartley to be fit to face Ireland, but winger a doubt

England captain Dylan Hartley is expected to be available to face Ireland at Twickenham on Saturday but doubt now hovers over the fitness of Elliot Daly.

Jonny May has revealed that the recent bite to training has forced the intervention of coaches, as England look to relaunch their NatWest 6 Nations title defence.

Paedophile’s victims say abuse was known of for years

Victims of paedophile basketball coach Bill Kenneally say they have evidence that garda&iacute; suspected him of abusing children at least eight years earlier than has been acknowledged to date.

Aaron Shingler: Wales will throw everything at Ireland

England 12 Wales 6:&nbsp;Aaron Shingler has vowed that Wales will &ldquo;throw everything&rdquo; at Ireland in a fortnight&rsquo;s time when they aim to keep alive their NatWest 6 Nations title hopes.

Youngs injury the only fallout for 7-try England

England&rsquo;s quest for an unprecedented hat-trick of Six Nations titles was launched by a 46-15 victory over Italy that produced a late flurry of tries.

The calls for England&rsquo;s skipper to be dropped can continue. Inside the Red Rose&rsquo;s camp, the Northampton Saints hooker is still the team&rsquo;s leader.

Ballygunner get to grips with Sixmilebridge in one point win

BALLYGUNNER (WATERFORD) 1-18 SIXMILEBRIDGE (CLARE) 1-17: A storming second half earned Ballygunner their place in the Munster club SHC final, the Waterford champions overturning a five-point first-half deficit to edge out Clare&rsquo;s Sixmilebridge by a point in Walsh Park, Waterford.

When tactics go out the window

As last Sunday&rsquo;s epic Munster club SHC quarter-final turned into extra-time, the TG4 cameras zoomed in on Ballygunner boss Fergal Hartley addressing his players, huddled together in the middle of Walsh Park, before they faced Thurles Sarsfields for another 20 minutes.

Ballygunner 2-18 De La Salle 0-16: Not since the 1950s has club hurling in Waterford seen such domination.

Louis Moult's double sent Motherwell into the Betfred Cup final as Rangers boss Pedro Caixinha and opposite number Stephen Robinson were sent to the stand during a bad-tempered semi-final.

Waterford manager Derek McGrath has bolstered his backroom team ahead of the All-Ireland senior hurling championship qualifiers with the additions of former playing stars Eoin Murphy and Fergal Hartley.

Galway make the great leap with victory over Kildare

England won’t have ‘The Fear’ tomorrow... Ireland will

The fascinating aspect of England&rsquo;s long unbeaten run is the mental fortitude they can now call on at critical moments, writes&nbsp;Ronan O&rsquo;Gara.

England captain Dylan Hartley: Slow reaction to Italy's ruck tactics was because 'I was confused'

Dylan Hartley is considering swapping the Bible for rugby's law book after accepting responsibility for England's slow reaction to Italy's tactics at Twickenham on Sunday.

England caught between a ruck and a hard place

This Six Nations championship had already provided some engaging contests but, with six fixtures remaining, none is likely to divide opinion more than that rather bizarre game in Twickenham last Sunday.

England 19 France 16: England will embrace the hostility awaiting in Cardiff once Eddie Jones has examined the psychology behind Wales&rsquo; control of a fixture he claims has left previous Red Rose teams &ldquo;petrified&rdquo;.

This time 12 months ago even the most optimistic England rugby fan could not have predicted the confidence which surrounds their bid for glory in this year&rsquo;s Six Nations.

Tighter sanctions regarding the high tackle mean a &lsquo;reckless&rsquo; infringement will earn the minimum of a yellow card and the maximum of a red, while &lsquo;accidental&rsquo; contact with the head will incur at least a penalty.&nbsp;

This probably comes across as premature given we&rsquo;re still over a week out from the first round of games, but you can take it as read that, regardless of what happens between now and March 18, the worst day of the Six Nations has already come and gone as far as the six captains and coaches are concerned.

Dylan Hartley feared he had jeopardised his England captaincy after receiving a third red card of his career that he views as a &ldquo;sobering&rdquo; reality check.

Eddie Jones insists the shortage of contenders for the England captaincy beyond Dylan Hartley is a symptom of the leadership deficit that exists throughout sport.&nbsp;

Rory Best insists Dylan Hartley still has plenty of time to state a compelling case for the British and Irish Lions&rsquo; captaincy.

IT Carlow endure a long night at Kildare

Kildare 4-24 IT Carlow 0-1: Kildare manager, Cian O&rsquo;Neill, was in a perplexed mood following the result of this game.

Northampton Saints flanker Teimana Harrison has leapt to the defence of Dylan Hartley, who was banned for six weeks yesterday following his red card against Leinster, with Harrison insisting his teammate &ldquo;is not a prick&rdquo;.

England set to stick with Dylan Hartley as captain

Dylan Hartley will be allowed to continue as England captain by the Rugby Football Union regardless of the outcome of the hearing that threatens to curtail his RBS 6 Nations participation.

Sean Cronin didn&rsquo;t hesitate in labelling Dylan Hartley&rsquo;s rush of blood to the head last Friday as &ldquo;rash&rdquo; and &ldquo;stupid&rdquo; but the Leinster hooker has warned that the incident and fallout from it could have a galvanising effect on a struggling Northampton side this weekend.

So many Irish forwards have been at the sharp end of Dylan Hartley&rsquo;s fingers, fists and fangs that it would be only fair if one were to gain from the mounting wreckage.

Dylan Hartley's suitability to lead the British and Irish Lions has been questioned by Brian O'Driscoll as the England captain waits to discover the damage caused to his career by yet another major disciplinary lapse.