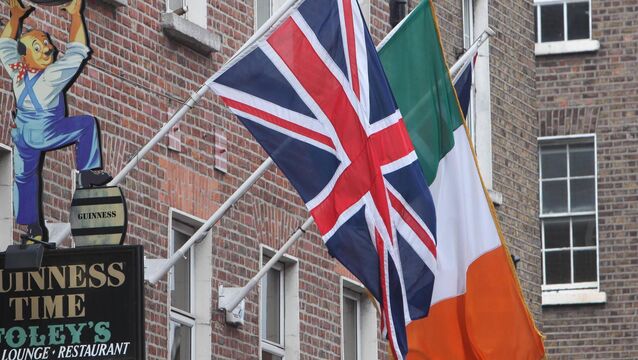 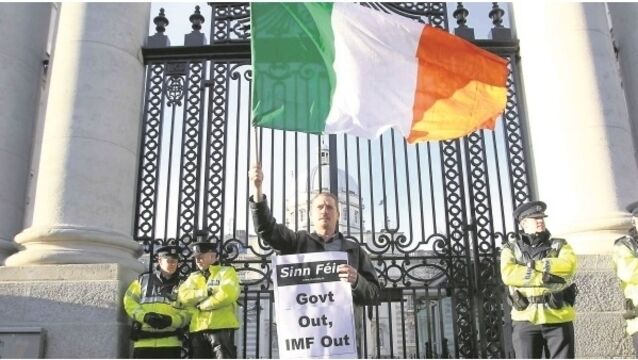 Dark days brought us to an economic hell

Political Editor Daniel McConnell revisits the fateful days leading up to the bailout, telling the story of one of Ireland’s darkest days — in the words of the people who were there 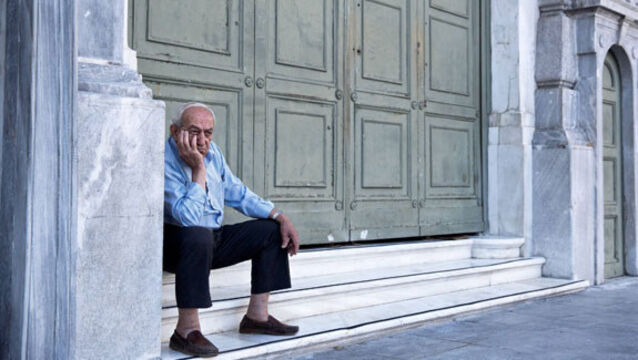 Government given go-ahead to repay €5.5bn in bailout loans

Greece and its international creditors have taken a big step towards an agreement that will ensure the cash-strapped country gets the money it needs in time to avoid a potential bankruptcy this summer.

The International Monetary Fund's executive board has approved a three-year bailout totalling 12 billion dollars to Egypt to support the country's ailing economy.

The EU's highest court has thrown out a legal challenge against an Irish bank bailout.

Irish Water to get €660m bailout

Irish Water will get a &euro;660m bailout this year but a decision to suspend water charges could have &ldquo;big consequences&rdquo; for funding other services next year, warns Housing Minister Simon Coveney.

Europe urgently needs a &euro;150bn bailout fund to recapitalise its beleaguered banks, particularly those in Italy, said Deutsche Bank&rsquo;s chief economist in an interview with Welt am Sonntag.

The president of the European Council has opposed Greece's demand for an emergency leaders' summit on the country's troubled bailout programme.

The Greek government is beginning a new round of talks with creditors sceptical about the depth and effectiveness of its pension reform plans amid widespread protests over the proposals.

Michael Noonan has been very honest with the Irish people, says Bruton

Jobs Minister Richard Bruton has denied Michael Noonan misled the Irish people, claiming he has been “very honest” around the issue of burning bondholders.

The banking crisis that bankrupted the Irish economy was entirely home made and made worse by Irish actions, the president of the ECB Mario Draghi has insisted.

Irish MEPs will this morning be allowed 15 minutes to question the President of the ECB, Mario Draghi, about the Irish banking crisis.

George Osborne: Too soon to forgive UK bankers for failures and scandals

Bankers hoping to move on from the financial failures and scandals of 2008 and afterwards got little succour from Britain&rsquo;s top two financial officials yesterday, who told them the time was not right.

Greece has failed to convince European creditors to release vital bailout funds to shore up the country’s public coffers and its crippled banks.

Allied Irish Banks plans to return to the subordinated bond market for the first time since the financial crisis. It is preparing to start repaying its &euro;21bn bailout by the year&rsquo;s end.

Alexis Tsipras: Bailout the only way out

Spending watchdog adds up total cost of bailout to the State

The total cost to the State of the bailout has been revealed as €60bn.

The former head of the International Monetary Fund (IMF) mission to Ireland says the ECB acted beyond its mandate when it pushed Ireland into a bailout.

Greece will miss its revenue target from asset sales this year due to delays in a &euro;1.2bn airport deal, the head of its privatisation agency said yesterday, in a setback to efforts to meet the terms of its new bailout.

Europe will be able to handle future economic crises without the help of the International Monetary Fund, the head of the eurozone&rsquo;s bailout fund told German magazine Der Spiegel yesterday.

In recent weeks, global equity markets have suffered the first material setback since the 2011 eurozone crisis (when global markets fell over 20%) and very understandably this has caused an increased level of anxiety among investors.

Europe&rsquo;s flawed political mechanisms condemn the bloc to repeated crises, and the notion of ejecting a member from the euro is an &ldquo;evil genie&rdquo; with destabilising consequences, a top central banker said yesterday.

Greece&rsquo;s radical left Syriza party can win re-election with an outright majority, a senior member said, governing without support from mainstream forces which also back the country&rsquo;s new international bailout.

Markets ‘to recover’ if Tsipras returned to power

Greek financial markets are likely to rebound strongly in the final quarter of the year despite their current malaise. Former Greek prime minister Alexis Tsipras last week resigned which paved the way for snap elections next month.

Italy is set to put senior unsecured bank bonds in line for losses with a law that facilitates writedowns to prevent taxpayer bailouts.

The German parliament approved a third bailout for Greece yesterday after finance minister, Wolfgang Schaeuble, said the country should get &ldquo;a new start&rdquo;, while in Athens the government agonised over whether to call a snap election.

Greece has agreed to sell to a German company the rights to operate 14 regional airports.

German lawmakers will vote on Wednesday on a new aid package for Greece, which needs approval to meet a debt payment deadline a day later.

The Greek government has defended its new bailout programme in tumultuous parliamentary sessions, as it faced a rebellion in the governing Syriza party ahead of a vote on the deal.

Greek MPs have been discussing the country’s critical third bailout with the goal of voting on it before a eurozone finance ministers’ meeting.

Greece’s government has submitted the draft bill for its third bailout in five years to parliament, aiming for a vote before an expected eurozone finance ministers’ meeting on Friday.

Agreement with creditors could be concluded as early as this week

Greece’s talks with its creditors on a vital third bailout are making “satisfactory progress”, the European Union executive has said in its most upbeat assessment so far.

Gormley says no link between bank guarantee and bailout

There is no evidence to link the EU-IMF bailout to the bank guarantee.

Greece invited the International Monetary Fund to participate in its negotiations with European creditors over a vital third bailout – talks that are expected to start next week.

EU economy chief Pierre Moscovici has said Greece&rsquo;s European creditors have agreed to provide debt relief so long as the country&rsquo;s government can deliver on the terms of its third bailout package.

Greek banks are poised to reopen after a forced three-week closure – but restrictions on cash withdrawals remain.

German policy-makers have given overwhelming approval to opening detailed negotiations with Greece on a new bailout package.

Greece buoyed by some good news

Greece got a triple dose of good news yesterday when creditors agreed to open talks on a third bailout package to give the country an interim loan to cover its debts and to provide more support to its closed banks.