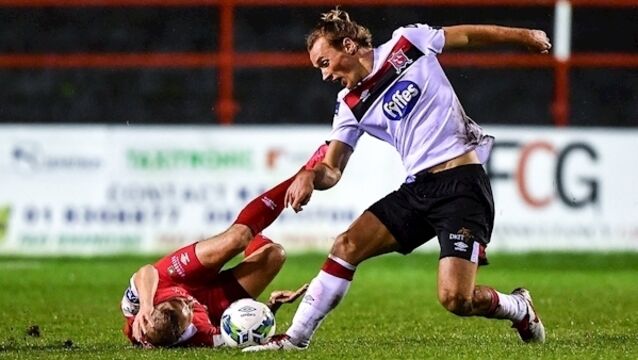 Premier Division football returned to Tolka Park after a six-year absence — but there was no fairytale homecoming for Shelbourne as they came up just short in an enthralling encounter with Dundalk. 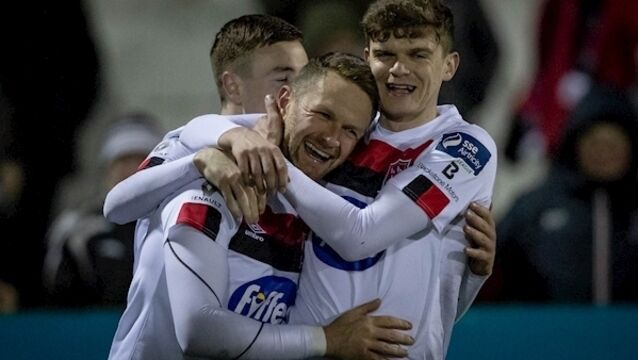 Champions Dundalk opened their season with a victory for the first time in three seasons as Dane Massey popped up with a 79th-minute winner to break Derry City hearts at Oriel Park. 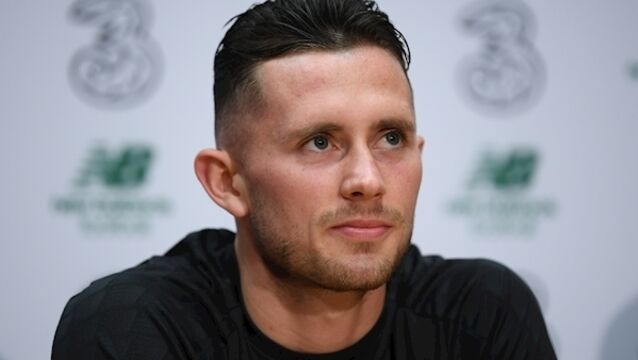 Cork City in talks on partnership with Preston

Cork City could be in a line for a welcome windfall if negotiations with Preston North End about a partnership reach a successful conclusion.

'It's the K-word, isn't it — confidence': Our guide to the year in guff

Do you agree with our League of Ireland team of the season?

Two goals inside the opening 33 minutes from Rafael Ratão and Aleksandar Čavrić killed the game as a contest and while the Lilywhites never gave up, even briefly threatening a mini-revival when Michael Duffy pulled one back midway through the second half, this ultimately proved a challenge too far.

Dávid Holman’s goal four minutes from the end has left Dundalk with it all to do in Tallaght next Tuesday if they are to keep their Europa League dreams alive.

I’ve a good feeling about this year, says Sean Maguire

It’s Thursday afternoon when I reach him on the phone, and Sean Maguire, just “chilling out” on a last day of rest before starting to climb the Championship mountain with Preston North End again, is reflecting on how Deepdale is no longer such a deep shade of green.

Gutsy Dundalk will go to Azerbaijan next week with a genuine opportunity of reaching the third qualifying round of the Champions League.

Dundalk will have to score in Latvia next Wednesday to keep their Champions League dreams alive after a frustrating stalemate with Riga FC at Oriel Park tonight.

Devine: 'Everybody wants to beat Dundalk'

Dundalk may well enjoy playing on the Brandywell’s big pitch, but Declan Devine insists the league leaders won’t find his Derry City a soft touch when they revisit Foyleside tonight.

Seán Gannon’s 73rd-minute goal was the difference at Tallaght last night, as Dundalk edged a nail-biting affair against Shamrock Rovers.

Boyle will officially join the League of Ireland Premier Division leaders on July 1, just in time for their Champions League qualifying campaign.

The former Dundalk player had been on loan at Dundee from Preston for the first half of this campaign.

Mikey Johnston stepped up to the plate at Parkhead with a brace in Celtic's 3-0 Ladbrokes Premiership dismantling of bottom side Dundee.

How the Irish fared: O’Neill handed boost by Preston double-act

With the Nations League double-header against Denmark and Wales looming, Callum Robinson fired a reminder of his talents to Republic of Ireland boss Martin O’Neill when scoring twice as Preston moved off the foot of the Championship table after a 4-0 win over Wigan.

Time to ground the magic plane

Another one of Preston's Irish recruits set for loan spell

The highs and lows of Irish football in 2017

Two goals and regular starts for Preston in the Championship and a League of Ireland winner&rsquo;s medal virtually in the post &mdash; all Sean Maguire needs now to complete a heady 2017 is to get the nod from Martin O&rsquo;Neill to play his part in an Irish redemption song as the World Cup qualifying campaign reaches its conclusion.

Official confirmation that Kevin O&rsquo;Connor has become Simon Grayson&rsquo;s last signing as Preston North End manager now gives way to speculation about who the Cork City player &ndash; as well as his teammate Sean Maguire and fellow League of Ireland exports Daryl Horgan and Andy Boyle &ndash; will be playing under at Deepdale next season.

David McGoldrick has been ruled out of Sunday's World Cup Qualifier against Austria due to injury.

Sean Maguire has spoken of his joy at securing a move to Preston, saying the large Irish contingent already at Deepdale meant choosing to join the Championship outfit was a &ldquo;no-brainer&rdquo;.

Cork City will lose their leading scorer Sean Maguire at the end of July after it was confirmed this morning that the striker has&nbsp;agreed&nbsp;a&nbsp;deal to&nbsp;join Preston North End.

Republic of Ireland manager Martin O'Neill has added nine players to the squad ahead of the friendly against Uruguay at the Aviva on Sunday.

Former Cork City player Alan Browne has been added to the latest Republic of Ireland squad.

John Caulfield: ‘If Messi did that, we’d all be raving about it’

Cork City manager John Caulfield has dismissed suggestions striker Seanie Maguire has had his head turned by transfer speculation as the club look to end the Premier Division&rsquo;s first series of games tonight with a 100% record.

It was a mixed weekend for the Irish contingent at Championship outfit Preston as Aiden McGeady&rsquo;s sixth goal of the season rescued a 1-1 draw at home to Nottingham Forest on an afternoon when Daryl Horgan and Andy Boyle were hauled off at half-time.

Seamus Coleman is expected to take the first steps on the road to his recovery from a sickening double leg fracture when he leaves hospital today.

Night to savour for debutants

The FAI like to play up the time spent by some of its senior players in the domestic league but the rite of passage for most Republic of Ireland internationals still involves a one-way ticket across the Irish Sea before they possess the right to vote or drink.

Martin O’Neill: We must be better at creating chances

&ldquo;There were a number of players making debuts and that&rsquo;s great for them to go out there and wear an Irish shirt,&rdquo; said O&rsquo;Neill.&nbsp;

Although a number of the more senior candidates &ndash; among them John O&rsquo;Shea, Glenn Whelan and Jon Walters &mdash; have left the squad to return to their clubs, it still tells you something about how important a player Robbie Brady has become for Ireland, that Martin O&rsquo;Neill has nominated him as captain for the friendly game against Iceland at the Aviva tonight.

Robbie Brady was the man of the moment at the FAI 2016 Awards last night, taking an unprecedented hat-trick of gongs for Senior Player, Young Player, and for his Euros winner against Italy, Goal Of The Year.

As the League of Ireland season kicks off tonight, all eyes will be on Dundalk&rsquo;s four-in-a-row title quest even if the manager with history in his grasp won&rsquo;t countenance personal accolades.

Kevin O&rsquo;Connor believes Cork City&rsquo;s home form will be the X factor which can bring the league title to Leeside.

Liam Mackey looks ahead to a new season of domestic football in Ireland.

Liam Mackey looks ahead to the President&rsquo;s Cup final and the &rsquo;New Firm&rsquo; rivalry between Dundalk and Cork City.

Roy Keane has said that League of Ireland players should be inspired by the example of Daryl Horgan, Andy Boyle, and Gary Rogers breaking into the Ireland squad while playing with champions Dundalk last season.

With their remarkable run in Europe coming on top of a third league title in succession, Dundalk would always have been going into the new season with the spotlight firmly upon them.

Alan Browne: ‘We can beat any team on our day’

There isn&rsquo;t a seat to be got at Deepdale for today&rsquo;s FA Cup tie but Preston North End&rsquo;s Cork native Alan Browne feels the middle of pitch is the best possible place for him against Arsenal&rsquo;s galaxy of stars.

How the Irish fared: Robbie Brady slides out of glorious year with red card

A year that featured the glorious high of scoring Ireland&rsquo;s winner against Italy in Lille ended in frustrating fashion for Robbie Brady as the Dubliner was sent off in Norwich City&rsquo;s 0-0 Championship draw at Brentford on Saturday.

John Caulfield: Why bigger would be better in the League of Ireland

The new SSE Airtricity League structure was announced on Thursday and, with 12 set to become 10 in the Premier Division in 2018, it means that, quite late in the day, clubs now know that three teams will be relegated and one promoted from the First Division at the end of the coming season.

Daryl Horgan insists Dundalk can continue to go from strength to strength next season even if some of the club&rsquo;s leading lights depart.

Success always comes with a price. Just ask Connacht, who this week are absorbing the blow that was head coach Pat Liam&rsquo;s decision to accept the task of resurrecting the sleeping giant that is Bristol Rugby Club from next summer on.

Just a glimmer of hope left for Dundalk

Down but not out, Dundalk will travel to Tel Aviv next month with qualification for the knock-out stage still possible but now not so straightforward, after this 0-1 loss to AZ Alkmaar made it a three-cornered contest between Stephen Kenny&rsquo;s team, the Dutch side and Maccabi in the race to follow Zenit St Petersburg into the final 32.

The Ireland team to face Austria has been named ahead of their World Cup qualifier inside the hour.