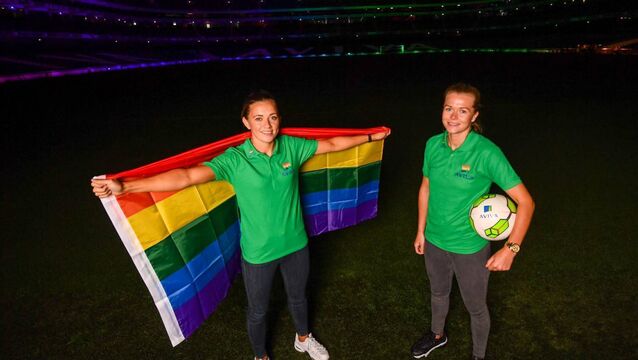 Partners on the international pitch and in life, Katie McCabe and Ruesha Littlejohn say they have been very moved by the response to their decision last year to come out in public as a couple. 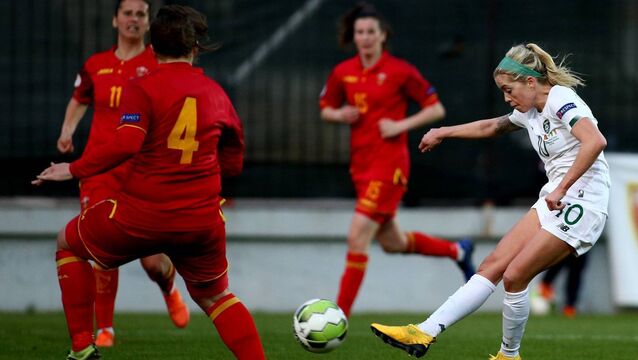 Pauw pleased as Ireland remain 'very much on track for qualification'

With the routine qualifiers out of the way, Ireland manager Vera Pauw admits the real tests for reaching next year’s European Championships loom over the next six months. 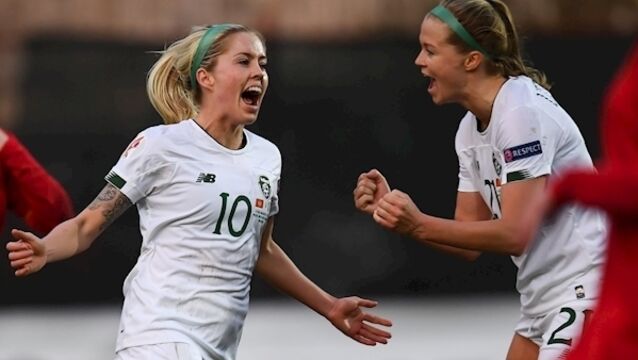 Ireland moved top of their Women’s European Championship group by beating minnows Montenegro in Petrovac with the help of two late goals.

Liam Mackey: What Katie McCabe does next...

Megan Connolly has been ruled out of Ireland’s Euro 2021 qualifier against Greece in Tallaght on Thursday.

Idle hands make for prolonged bouts of reflection but Ireland cannot afford to dwell too much on their Greek tragedy.

The Republic of Ireland blew the chance to surge joint-top of their women’s European Championship group heading into 2020 after conceding a sloppy stoppage-time equaliser against Greece this afternoon.

Vera Pauw will be forced into at least three changes in personnel as Ireland hunt a third successive victory in their Euro campaign against Greece today.

'Bruised but not beaten!': Tributes pour in after Katie Taylor's two-weight championship win

Punters and sports stars united in praise of the Bray boxer.

Vera Pauw believes downtime can keep Ireland on the up

Vera Pauw says her experience of giving players some downtime with their families ahead of matches makes for a happier camp.

Despite running up a 2-0 lead, defensive frailties were punished as Ukraine drew level before a second half own goal gave Ireland victory.

Watch all the goals as Ireland women's team see off Ukraine

Pauw eyes history as she steels Ireland for physical Ukraine

In a big week and month for Irish football, Vera Pauw is convinced her Ireland women’s team can use tonight’s Euro qualifier against Ukraine to take a huge step towards creating history.

Claire Walsh is hoping that a reunion with Eileen Gleeson will help to boost her Ireland career.

Motivation is a very personal thing. When Lisa Casserly was playing soccer for Ireland, that was all she wanted to do and though she was a club camogie player with Ballinderreen, it was a hobby.

The Republic of Ireland women's team are off to a winning start with a 2-0 defeat of Montenegro in their Euro 2021 qualifier.

After Montenegro were throttled 10-0 by Germany in their campaign opener at the weekend, Tom O’Connor should achieve a 100% competitive record as Ireland women’s team manager against the minnows tonight.

The recent FIFA Women’s World Cup France was a game changer for football. As the series progressed, the players gained huge traction with supporters for their skill, drive and guts. A record 750 million watched on TV. Channelling the excitement, sports pundits are predicting a brave new world where superstar female soccer players are awarded the same terms and conditions as their male counterparts.

McCabe: I’ve no issue with internal appointment as boss

Katie McCabe has said she has no issue with whether the FAI make an internal or external appointment as manager of the Irish women’s team.

Amy O'Connor: ‘I am very, very proud to be from Knocknaheeny’

The world champions dominated from the outset of this clash which kicked-off their victory tour with a bang in front of 37,040 people at the Rose Bowl Stadium in Pasadena.

The Ireland Women’s National Team will take on world champions USA in a friendly on August 3.

The Kieran Shannon interview with Louise Quinn: Changing her game

Republic of Ireland defender Louise Quinn has been one of the punditry stars of a groundbreaking World Cup for women's football. But she won't be satisfied until she has starred in one on the pitch. The Arsenal stalwart won't back away from a challenge, having had to completely change her playing style to become an integral part of a star-studded multinational side now chasing Champions League glory.

Women can’t just let their football do the talking

The Women’s World Cup 2019 kicks off tomorrow in Paris with the hosts France taking on South Korea.

#SafeToDream: ‘It gives a voice to show it’s OK to be who you are’

Sitting in a Technicolor Aviva Stadium on Monday night, Katie McCabe turned to Ruesha Littlejohn and dreamed out loud.

Ireland internationals Katie McCabe and Louise Quinn are Women’s Super League Champions as Arsenal ended a seven-year title drought with a 4-0 win over Brighton at the Amex Stadium yesterday.

Strong start not enough for Ireland against Italy

An early goal from Republic of Ireland Women’s National Team captain Katie McCabe gave her side a superb start against Italy before they ultimately fell to a narrow defeat.

Republic of Ireland Women's National Team secured a fantastic victory over Wales thanks to a second-half header from Louise Quinn.

The girls in green gunning for glory on Wembley stage

There will be a crowd in excess of 40,000 at Wembley today to see Arsenal and Chelsea contest the 2018 Women&rsquo;s FA Cup final, writes Liam Mackey.

So no repeat of last year&rsquo;s heroics in Holland from Ireland in Tallaght last night, but no shame either, as the Netherlands showed why they are the European champions with a classy and comfortable 2-0 victory.

A late victory over Slovakia last night keeps Ireland&rsquo;s women firmly in the hunt to challenge European champions the Netherlands for a place at next year&rsquo;s World Cup.

Manager Colin Bell is confident Ireland&rsquo;s senior women&rsquo;s team can continue to confound predictions in their back to back home World Cup qualifiers against Slovakia on Friday and the Netherlands next Tuesday.

Katie McCabe ready to take shot at history in 2018

After a year of turbulence and triumph for the Irish women&rsquo;s team, skipper Katie McCabe is relishing the chance to make history in 2018.

Tonight&rsquo;s World Cup qualifier in Nijmegen could feature six Arsenal players with Ireland&rsquo;s Gunners pair Louise Quinn and Katie McCabe hoping to have the measure of their Dutch comrades.

Republic of Ireland Women's Team made a winning start to their FIFA 2019 World Cup qualification campaign with a 2-0 win over Northern Ireland tonight.

Stephanie Roche: ‘These are the type of games we have to win’