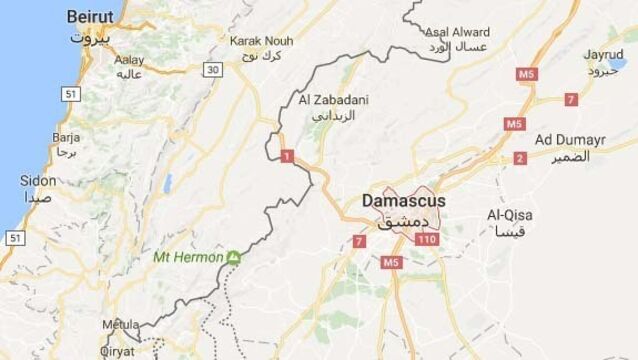 At least 40 people have been killed in twin explosions near religious shrines frequented by Shiite pilgrims in the Syrian capital, Damascus, according to Syria's interior minister and media reports.

INSURGENTS gunned down a neighborhood police chief and set off a suicide bomb near a patrol guarding a holy shrine, part of a series of attacks yesterday targeting Iraqi security forces that left at least eight people dead, including four police officers.

Insurgents gunned down a neighbourhood police chief and set off a suicide bomb near a patrol guarding a holy shrine, part of a series of attacks today targeting Iraqi security forces and leaving at least eight people dead, including four police officers.

Radical Shiite cleric Muqtada al-Sadr has been wounded in the fighting in Najaf, his spokesman said today.

US TROOPS yesterday postponed a planned offensive to root out Shi'ite militiamen they have been battling for a week in the holy Iraqi city of Najaf.

An Iraqi group holding seven foreign truck drivers hostage today threatened to kill one of the men within 24 hours if its demands were not immediately met.

The White House reaffirmed President George Bush’s support of his embattled Defence Secretary today as pressure mounted on him to sack Donald Rumsfeld over the military’s abuse of Iraqi prisoners.

President George Bush told Arab TV today that the treatment of Iraqi prisoners by some members of the US military was ”abhorrent” but does not represent “the America that I know”.

An Arab TV station showed a video today of what it said were three Italian hostages in Iraq, with their captors’ threatening to kill them.

Captured US soldier put on show

Iraq’s top Shiite cleric warned coalition forces against entering the holy cities of Karbala and Najaf to capture a radical cleric wanted for murder as US troops and Shiite militiamen fought in the south. Thirteen Iraqis died in clashes in the north and south.

BLACK-GARBED captors with guns, knives and swords threatened to burn alive three blindfolded Japanese hostages unless Tokyo removed its troops from Iraq, according to a videotape seen on Arab TV.

THREE American soldiers were killed yesterday when their convoy was hit by gunfire and rocket-propelled grenades in northern Iraq, a military spokeswoman said.