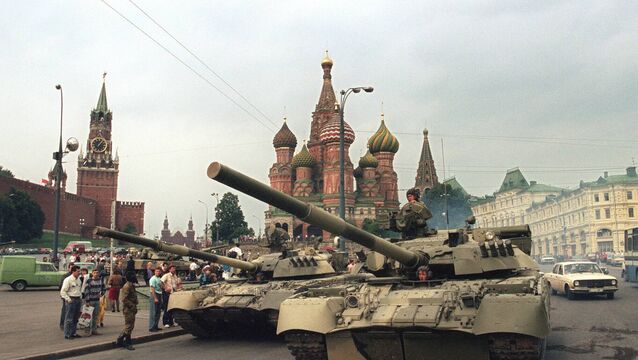 During Putin’s 20 years in power, the meaning of the August 1991 plot by Soviet hardliners to topple Mikhail Gorbachev’s reformist government has been inverted. Now, the attempted coup is portrayed as an effort by Russian forces to preserve the state, thwarted by anti-Soviet sentiment, writes Nina L Khrushcheva 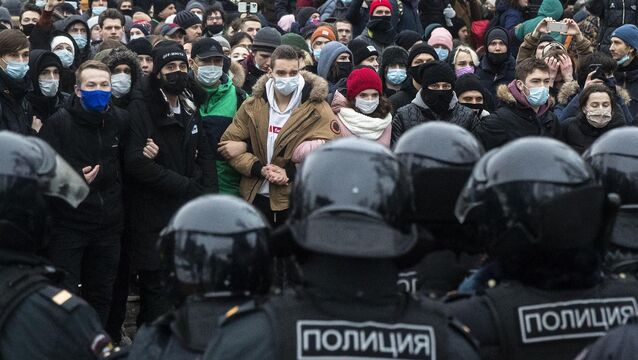 Irish Examiner view: Intolerance alive in US and Russia

It may seem, though it is not, incongruous to link the looming Trump impeachment hearings and the weekend protests across Russia against Vladimir Putin’s dictatorship. It is not too hard to argue that without one you get, or invite, the other. 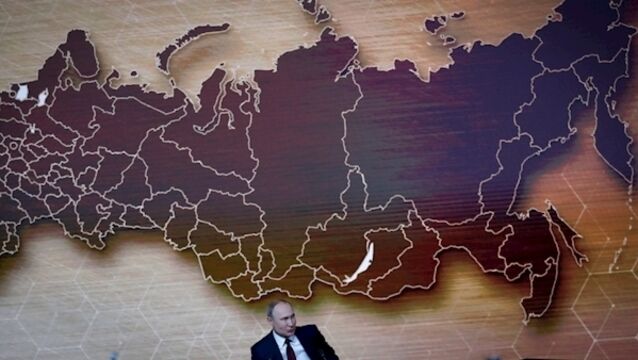 Lyubov Sobol: Russia is not Putin but ‘is embodied by its 146 million citizens’

The Russian president is terrified of free and fair elections as his recent crackdown demonstrates, writes Lyubov Sobol

Vladimir Putin takes 77% of the vote in election victory

Russian president Vladimir Putin has won a fourth term in office with nearly 77% of the vote - his highest ever score - giving him a mandate to pursue his nationalist policies for another six years.

Protesters gathered across Russia to support opposition leader Alexei Navalny's call to boycott the March presidential election, and Mr Navalny himself was arrested while walking to the Moscow demonstration.

Hundreds of supporters of Russian opposition leader Alexei Navalny have endorsed him for the presidency and prepared to file his nomination with election officials, putting pressure on the Kremlin to allow him to run.

Russian opposition leader: I could beat Vladimir Putin in a fair election

Russian opposition leader Alexei Navalny has said he is confident he could beat President Vladimir Putin in a fair election.

Putin’s no good but what’s the alternative?

‘No let up’, Kremlin critic vows on release

Boris Nemtsov’s date ‘did not see his killer’

The Ukrainian woman with Kremlin critic Boris Nemtsov when he was gunned down told Russia media yesterday that she did not see his killer, as conflicting reports emerged about the availability of surveillance footage showing the slaying.

Russian investigators have raided the office of anti-corruption campaigner and leading opposition figure Alexei Navalny after he was taken for questioning by a dozen policemen who intercepted him outside his Moscow apartment building.

Russian anti-corruption campaigner and leading opposition figure Alexei Navalny has been taken in for questioning, escorted by a dozen police who he said intercepted him outside his Moscow apartment building.

Rally came after campaigner was given suspended term for fraud.

Vladimir Putin’s chief political foe has been convicted along with his brother in a fraud case widely seen as retribution by the Kremlin, setting off one of Russia’s boldest anti-government demonstrations in years.

Alexei Navalny, the anti-corruption campaigner who is a leading foe of Russian president Vladimir Putin, has been found guilty of fraud and given a suspended sentence of three-and-a-half years.

Russian opposition leader Alexei Navalny has been put under house arrest, forbidding him from using the internet or receiving any visitors.

Russian riot police detained hundreds of protesters at a Moscow courthouse where seven opponents of President Vladimir Putin were jailed from two and a half to four years over a demonstration that turned violent.

Russian protest leader Alexei Navalny escaped being sent to a penal colony on controversial charges he claims were ordered by the Kremlin after a court converted his five-year term into a suspended sentence.

Russian opposition leader Alexei Navalny has returned to Moscow after his surprise release from jail and says he will push forward in his campaign to become mayor of the capital.

Russia unexpectedly freed opposition leader Alexei Navalny on bail yesterday, bending to the will of thousands of protesters who denounced his five-year jail sentence as a crude attempt by president Vladimir Putin to silence him.

A Russian court has released opposition leader Alexei Navalny from custody less than 24 hours after convicting him of embezzlement and sentencing him to five years in prison.

Thousands of opposition supporters gathered today outside the old KGB headquarters in central Moscow today to mark a year of mass protests against Vladimir Putin and his government.

Russian opposition leaders have been detained while protesting against what they say is the torture of a fellow activist.

Mogul under pressure to sell assets

A tycoon whose holdings include a newspaper critical of the Kremlin says he wants to sell his Russian assets because of pressure from the security services.

British Prime Minister David Cameron will discuss trade, Syria and human rights in talks with Vladimir Putin in the latest round of Olympic Games-focused diplomacy.

One of president Vladimir Putin’s fiercest critics has been charged with theft and is facing a 10-year prison sentence as the Kremlin steps up a crackdown on dissent.

Russian police searched the homes of prominent opponents of President Vladimir Putin in a clear warning he is losing patience with dissenters before a major rally today that could draw tens of thousands of people challenging his rule.

Russian investigators searched the apartments of several opposition leaders today and called them in for questioning, raising tensions on the eve of a large protest against President Vladimir Putin.

Police in Moscow have arrested top opposition figures along with demonstrators after a protest march on the eve of Vladimir Putin’s inauguration as president tried to reach the Kremlin.

Vladimir Putin scored a decisive victory in Russia’s presidential election to return to the Kremlin and extend his hold on power for six more years.

Prime Minister Vladimir Putin rolled to victory in Russia’s presidential election today, according to exit polls cited by state television, but the vote was tainted by claims of violations, including “carousel voting” in which voters were bused around to cast several ballots.

Russsian observers today warned they are seeing widespread violations in elections expected to return Vladimir Putin to the Kremlin, despite efforts to give the appearance of a fair vote.

Russians go to the polls

Monitored by web cameras and a network of volunteer civilian observers, Russians voted today in presidential elections expected to return Vladimir Putin to the Kremlin.

Vladimir Putin appears all but certain to return to the Kremlin in tomorrow’s Russian presidential election, but he will find himself in charge of a country far more willing to challenge him.

THE Russian protest movement yesterday vowed there would be new demonstrations this week after a leading anti-Kremlin activist was given a fresh jail sentence following the latest mass rally against Vladimir Putin.

Tens of thousands of protesters have gathered in central Moscow to demonstrate against alleged voting fraud and Russian prime minister Vladimir Putin, in the largest public show of discontent since the end of the Soviet Union.

HAS Vladimir Putin lost his touch?