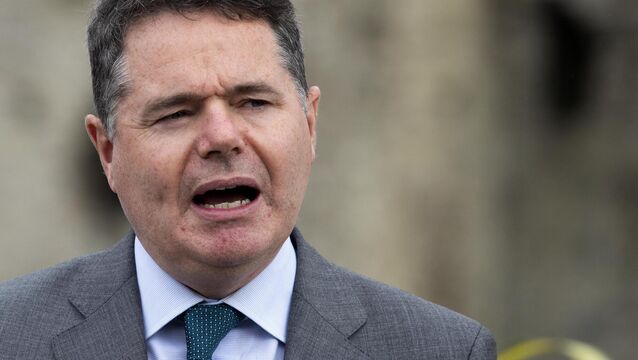 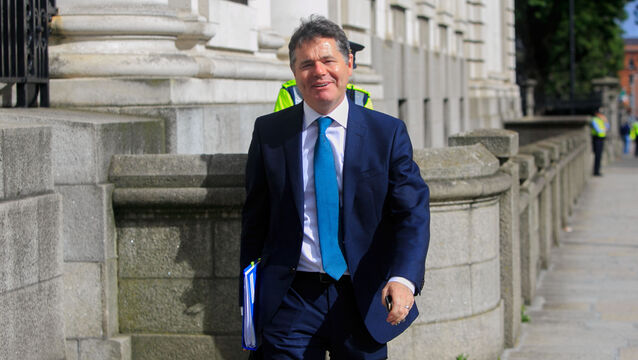 Paschal Donohoe confident of 'inclusive and strong recovery' after Covid

The Minister for Finance was elected to President of the Eurogroup in July, and met with finance ministers across Europe in Berlin today 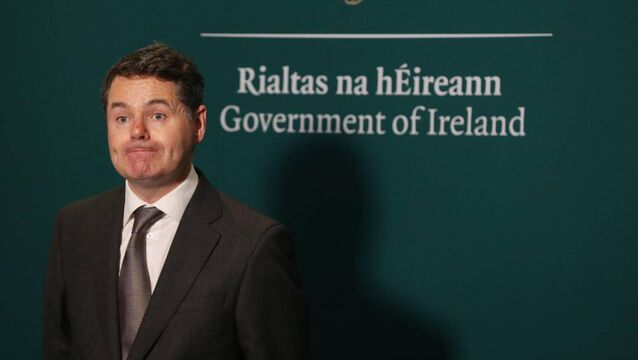 The €750 billion bailout plan aims to ease the economic pain of the Covid-19 pandemic.

Opposition to such a major debt sharing deal was led by Germany, Austria and Holland

Yanis Varoufakis says Mario Draghi’s stewardship of the ECB was blighted by the constraints he worked under — and the same problem faces his successor.

The conventional wisdom among many Brexit opponents has been that the UK’s new prime minister is “doing a Varoufakis” and will be crushed in similar fashion.

European Ombudsman Emily O’Reilly has initiated an investigation into the lack of transparency around EU ministerial decisions on annual fish quotas.

The Government is to nominate Central Bank governor Philip Lane to become Ireland&rsquo;s first ever vice-president of the European Central Bank.

Race for EU’s top jobs about to heat up

As Jeroen Dijsselbloem&rsquo;s turbulent reign over eurozone&rsquo;s finance ministers&rsquo; meetings comes to an end, horse-trading for his succession between the bloc&rsquo;s countries and political groups is about to heat up.

AS we fret about Brexit and the darkened world that will bring; as we fret about the excitable US president, Donald Trump; as we fret (some of us anyway) about Fine Gael&rsquo;s grand adventure in ineptitude and prevarication; and as we fret about really important things such as Johnny Sexton&rsquo;s fitness and the size of the French pack, the people of Greece are, again, wondering what the future holds and how much more they might be asked to sacrifice and endure.

Finance Minister Michael Noonan&rsquo;s Budget 2017 has passed muster with the European Commission but Ireland has been warned again about the State relying on the one-off bounty from booming corporate tax revenues.

Italy: ‘Progress’ in talks with Brussels over broken banks

Italy said yesterday that it is &ldquo;making progress&rdquo; in protracted talks with Brussels over the best ways to inject much-needed money into its broken banks.

Bill introduces taxes for most Greeks; anarchists clash with police on the streets of Athens

Envoys from the EU&rsquo;s 28 governments failed to bridge remaining differences over changes to the UK&rsquo;s terms of membership, underscoring the political stakes in the run-up to a meeting of the bloc&rsquo;s national leaders next week.

Central banks have little room for error in a low-growth world in which over-leveraged and commodity-dependent emerging economies and a slowing China are major risks, top international financiers told the International Monetary Fund&rsquo;s meeting.

Markets ‘to recover’ if Tsipras returned to power

Greek financial markets are likely to rebound strongly in the final quarter of the year despite their current malaise. Former Greek prime minister Alexis Tsipras last week resigned which paved the way for snap elections next month.

There are ways in which debt could be sensibly restructured without any cost to taxpayers and in a manner that brings Europeans closer together, writes former Greek finance minister&nbsp;Yanis Varoufakis

EU economy chief Pierre Moscovici has said Greece&rsquo;s European creditors have agreed to provide debt relief so long as the country&rsquo;s government can deliver on the terms of its third bailout package.

Fulfilling bailout terms will be an impossible task for Greece

Greece&rsquo;s bailout deal is in line with previous bailouts, only worse. It will lead to further deterioration of the Greek economy and debt, writes Pat Cradock

Greece gets a ‘water boarding’ as it strives to stay afloat

GREECE just got to the starting line after 17 hours of what was described by one EU diplomat as &ldquo;water boarding&rdquo; on its path to staying in the eurozone, writes Ann Cahill

A planned meeting of European Union leaders has been cancelled as crisis talks continue about Greece's place in the single currency zone.

The Greek prime minister Alexis Tsipras is to make a direct appeal to the European Parliament amid growing pessimism over chances of a deal to prevent the country’s financial meltdown.

Greeks jubilant despite fears of Grexit

Jubilant Greeks celebrated their democracy last night as they voted overwhelmingly against the austerity of the past five years but insisted that it is a vote for Europe.

Greece has been failed by eurogroup and Tsipras

In the wake of the Greek referendum&nbsp;Kostas Karkagiannis, the foreign business editor of Kathimerini newspaper, looks at how Greece was treated by the eurozone and Tsipras

The European Central Bank has kept its emergency liquidity assistance to Greek banks unchanged at &euro;88.6bn, and did not impose higher haircuts which would have reduced the sum available and caused banks to collapse immediately.

Default is the first step on return to drachma in Greece

Greece&rsquo;s default on its debt to the IMF could prove to be the first step in it effectively leaving the euro, proving that the currency union is not set in stone.

Greece was urged to stay in eurozone

Alexander Saeedy and John O&rsquo;Donnell report on the 10-point European Commission plan that has been published &lsquo;in the interest of transparency and for the information of the Greek people&rsquo;.

Stunned Greeks faced shuttered banks, long supermarkets lines, and overwhelming uncertainty as a breakdown in talks between Athens and its international creditors plunged the country deep into crisis.

Greece&rsquo;s creditors, including the ECB, have not slammed the door shut on doing a deal in the next few days as the country appeared to be rushing towards default and a euro exit.

Greece repaid &euro;750m to the IMF a day early, just as eurozone finance ministers sounded upbeat on negotiations to complete changes to the country&rsquo;s bailout programme.

Greece defied its international creditors yesterday by sticking to &ldquo;red lines&rdquo; on pension and labour market reforms and urging lenders to give ground, dimming prospects of progress next week towards securing desperately needed financial aid.

Greece made a small interest payment to the International Monetary Fund (IMF) yesterday, but European lenders dashed hopes for a cash-for- reforms deal before a more crucial, bigger instalment Athens must pay next week.

Global investment bank Cantor Fitzgerald is the latest financial body to weigh in on the Irish economic recovery with strong 2015 growth projections.

Greece defiant as creditors pile on the pressure

Greece has said it will not renege on election pledges to end austerity measures as creditors pressed for a deal to free financing and avert a widening crisis.

The eurozone is doubtful that a deal will be struck with Greece next week on economic reforms for bailout funds, potentially leaving the country perilously short of money.

Greece has made another plea to the eurozone for cash to avert bankruptcy but has been told to present an improved list of economic reforms within six working days for finance ministers to pave the way for any more lending, EU officials said yesterday.

Greece must reach an outline funding agreement with its lenders at a meeting of eurozone finance ministers on April 24, its finance minister told a Greek newspaper yesterday.

Greek prime minister Alexis Tsipras and German chancellor Angela Merkel put on a public display of mutual goodwill yesterday, appealing to Greeks and Germans to set aside recrimination and national stereotypes and work for a better European future.

A list of reforms, costed and with timelines, will be presented to Brussels by Athens within the next two weeks, with all sides agreeing that a new start for Greece is needed.

Creditor officials and Greek authorities have begun talks intended to unlock bailout funds, as some euro-area central bankers were said to raise opposition to the prospect of additional emergency cash for the country's banks.

European finance ministers are piling pressure on Greece to open its books and follow through with pledges agreed to in its rescue package, as the country tries to avoid running out of cash as soon as this month.

Greece’s proposal to use “non-professional inspectors” including “students, housekeepers and even tourists” to crack down on tax evasion has earned the government wide scorn from political opponents and on the internet.

A lifeline to a bankrupt country - Greece reprieve

WHETHER or not Greece makes the best use of the deal sanctioned, in the broadest terms at least, by the European Union, the European Central Bank, and the International Monetary Fund remains to be seen but it is certain that the country, its newly elected government and its embattled and often demeaned population will not have too many more plausible opportunities to bring some sort of stability to their society and their economy.

The stage is set for a bad tempered meeting between Greece and its eurozone colleagues over extending its present programme, with Germany demanding major compromises from Athens.

Greece&rsquo;s leftist-led government said it will today submit a request to the eurozone to extend a &ldquo;loan agreement&rdquo; for up to six months, raising prospects of a last-minute deal to keep the heavily indebted country afloat.