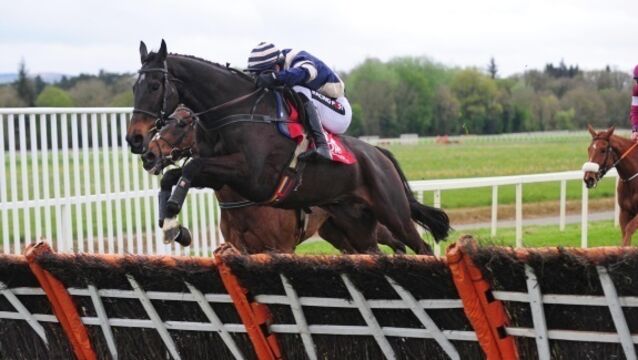 There was a huge crowd at Cork Racecourse for a bumper, eight-race programme on Easter Sunday, and the feature race, the Vincent O&rsquo;Brien Centenary Chase, went, in great style, to Val De Ferbet.

Thistlecrack still a work in progress

Promising Village looks poised to follow up at Cheltenham

Hoping for the best, but fearing the worst for the jump season

Odds-on Lofgren sees off rivals with the minimum of fuss

Federici on course for Punchestown

Federici proved himself on course for next week&rsquo;s Punchestown Festival when coasting to an emphatic victory in the Next racing At Fairyhouse June 2nd Handicap Hurdle in Fairyhouse yesterday.

The Norman Lee-trained Festive Day proved a shock 50/1 winner of the Follow Fairyhouse On Social Media Beginners&rsquo; Chase on a mixed day for jockey Andrew Lynch in Fairyhouse yesterday.

The remarkable run of success being enjoyed by champion trainer Willie Mullins for owners Andrea and Graham Wylie continued in Naas yesterday as odds-on favourites Bellshill and Shaneshill provided them with a double.

The progressive Prince Of Scars caused an upset when landing the Grade 1 Christmas Hurdle at Leopardstown yesterday under a beautifully judged ride from Davy Russell.

Willie Mullins quipped: &ldquo;The rumours were true&rdquo; after the well-touted Min made an impressive Irish debut in the Festival Hospitality On Sale Maiden Hurdle in Punchestown yesterday.

Perfect Woman produced a typically game performance to complete her four-timer in the Ballagh Mares&rsquo; Handicap Hurdle at Thurles.

A winter packed with wonderful possibilities

Easter Monday 2016. Somewhere in County Meath.&nbsp;The traffic all the way up to Fairyhouse is brutal. It&rsquo;s not surprising really.

For the second consecutive year the Arthur Moore-trained Gentleman Duke landed the featured Kinsale Handicap Chase and, in doing so, gave jockey Barry Geraghty the first leg of a double yesterday at Cork Racecourse.

It was a night of mixed luck for trainer Gordon Elliott in Ballinrobe last night as Eshtiaal bolted-up in the Audi Ballina Handicap Hurdle, compensation following the defeat of both odds-on favourite Vercingetorix and Hostile Fire in the earlier Sheridan Electric 4-y-0 Hurdle.

Joint-favourite Waxies Dargle, ridden for Noel Meade by Paul Townend, ploughed through the softening ground to land the &euro;50,000 Ladbrokes Ireland Handicap Hurdle, feature on the opening day of Killarney&rsquo;s May meeting.

Trainer Ted Walsh has been cleared of any wrongdoing and will face no penalty over the Foxrock case, the Turf Club has announced.

On an evening when Mikey Fogarty was concussed and sustained an injury to his right knee in a fall before being removed to nearby South Tipperary General Hospital, the Tom Taaffe-trained Gold Bullet landed the featured Suir Valley Chase in Clonmel.

Victory and tragedy: Connell takes his swing in fortunes in typically philosophical fashion

There may be a dictum that frowns on cheering in the press box, but the sight of Martello Tower persevering in the Albert Bartlett Novices&rsquo; Chase was guaranteed to curry quiet favour among those tasked with covering these events.&nbsp;

Mags Mullins saddled her first Festival winner when Martello Tower came out top in a gruelling battle for the Albert Bartlett Novices’ Hurdle at Cheltenham.

Trainer Eoin Griffin is keeping his fingers crossed Azorian has turned a corner after the highly-tried gelding gained an overdue success at Navan yesterday.

Sub Lieutenant keeps it in the family for Sandra

It was a case of the best wine being kept until last in Punchestown yesterday as the Noel Meade-trained debutant Disko proved the undoubted star of the show when bolting-up in the bumper.

Roi Des Francs gave Willie Mullins a third successive win (and a fourth in five years) in the Grade 3 Surehaul Mercedes Benz Novice Hurdle in Clonmel yesterday, the centrepiece of another treble for the champion trainer.

Dalmatia will be tough nut to crack

The Eddie Harty-trained Dalmatia should prove tough to beat in the Kilsheelan Mares Maiden Hurdle on today&rsquo;s rescheduled card in Clonmel.

‘I have to be careful not to get too emotional. It’s bad for the image!’

Leopardstown yesterday is easy to describe. There&rsquo;s never been an afternoon like it at the track, writes Pat Keane.

Vautour back on Cheltenham trail

Vautour assumed clear favouritism for the JLT Novices&rsquo; Chase at Cheltenham after getting his fencing career back on track with a facile success in the Leopardstown Killiney Novice Chase yesterday.

Lieutenant Colonel began a memorable day for Bryan Cooper when proving a very popular, and rather poignant, winner of the other Grade 1 on the card, the Squared Financial Christmas Hurdle at Leopardstown yesterday.

There was a sensational start at Thurles yesterday when the hitherto unbeaten in nine races, Un de Sceaux, fell at the third last in the Killinan Beginners Chase.

The Tullow Tank made an impressive return from a lengthy layoff as he claimed the Fairyhouse Membership 2015 On Sale Now Beginners Chase on his fencing bow at Fairyhouse yesterday.

Tullow tanking ahead of chasing debut

Vics Canvas, who had never previously won over fences, broke his duck in style when running away with the Paddy Power Cork Grand National at Cork yesterday.

Cheltenham Festival winner Very Wood made a solid start to his career over fences with a workmanlike success at Galway yesterday.

Gutsy Rock finds plenty to get off mark

"I didn&rsquo;t think we would have many winners this week, he was our banker", said Pat Flynn, after his Gusty Rock had landed the Family Fun Afternoon Maiden Hurdle at the final stage of the Tramore festival yesterday.

Eye Of The Storm dug deep to strike gold for the first time this year in the Group Three Ballyroan Stakes at Leopardstown last night.

Creek follows up in effortless style

Rae&rsquo;s Creek and Alton Bay, both winners on the level at the track last time, got off the mark in impressive style in the maiden hurdle action on last night&rsquo;s card in Ballinrobe.

Circe’s Island off the mark in style

Tom Gibney, who won the 2012 Irish Grand National at Fairyhouse with Lion Na Bearnai, was on the mark at Limerick yesterday when the consistent Circe&rsquo;s Island landed the Follow Us On Twitter Mares&rsquo; Maiden Hurdle.

Cillian’s Return gets off the mark over flights in style

Cillian&rsquo;s Return, bought out of Bill Farrell&rsquo;s by J P McManus after taking a bumper at Fairyhouse on New Year&rsquo;s Day, made a winning start for his new connections when easily taking the Michael Maher Building And Construction Services Maiden Hurdle at Tipperary last night.

King for the Day on Daredevil

The Joe Murphy-trained Daredevil Day defied a huge hike of 13lbs for winning at Sligo when arriving late and fast to land the Live The Dream With Tote Handicap at Killarney last night.

National Hunt racing is a notoriously tough game to make a name for oneself, but Gavin Sheehan has been doing just that.