Richard Hogan: Alienating a parent is damaging for the whole family 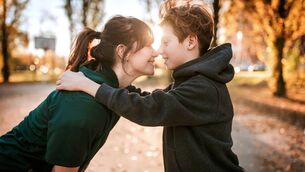 International Men’s Day: How to raise the next generation of men