Five of the top moments from The Ellen DeGeneres Show 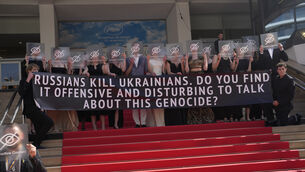 Protesters speak out against Ukraine war on Cannes red carpet